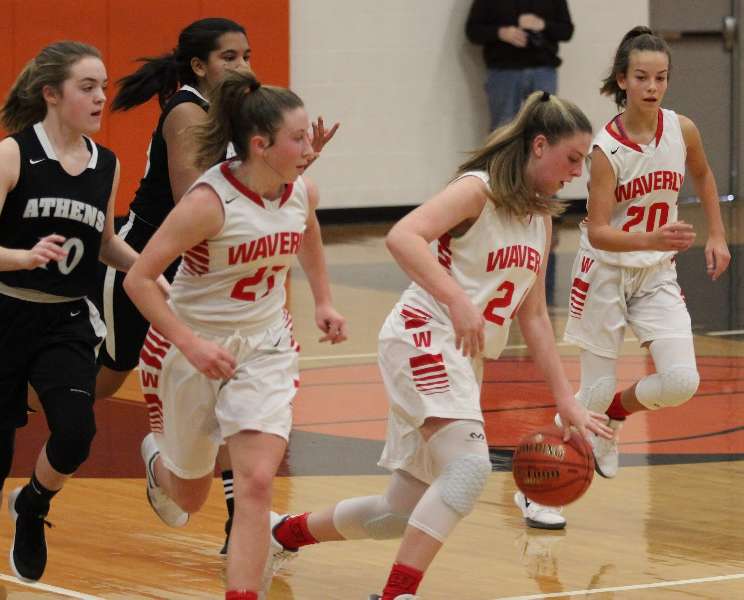 TOWANDA — Waverly took an early lead, and pulled away for a 29-16 win over Athens here Saturday morning in the junior varsity girls championship game of the annual Valley Christmas Tournament.

Waverly led 8-5 after the first quarter, and extended their lead to 14-7 at the half with a 6-2 spurt in the second quarter.

Ashlen Croft, Alivia Daddona, and Addison Westbrook scored four points apiece in the first half, and the Lady Wolverines were 6-for-6 from the free-throw line.

Paige Robinson scored four points in the third quarter as Waverly used a 7-3 spurt to up its advantage to 21-10 entering the final eight minutes.

Croft, who was 6-for-6 from the free-throw line in the game, scored six points in the fourth quarter as Waverly put the game away.

Croft led all scorers with 12 points, while Westbrook and Robinson added six points apiece, and Daddona chipped in with four.

Waverly 44, Towanda 32
At Towanda, Waverly used a 16-0 run to take control en route to a 44-32 win over Towanda Friday afternoon in the opening round of the annual Valley Christmas Tournament.

Waverly led 6-4 after the first quarter, but both teams heated up from the field in the second quarter.

Paige Robinson scored 10 points, including a 3-pointer and an old-fashioned three-point play, but her last bucket of the quarter, with 23 seconds remaining, gave the junior Lady Wolverines a 22-20 lead at the half, and triggered the decisive run.

Waverly’s defense shut out Towanda in the third period, while Peyton Shaw scored four points, Michaela Lauper added a conventional three-point play, and Robinson knocked down a 3-pointer to fuel a 14-0 run that put Waverly up 36-20 entering the final eight minutes.