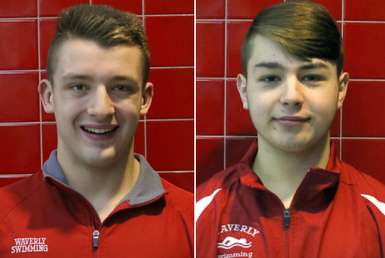 Atanasoff and sophomore Kaden Wheeler were quad-winners for the Wolverines, now 7-0 and winners of 37 consecutive dual meets. They seven of the 11 swimming events, including all three relays.

Atanasoff, who broke the 50- and 100-yard freestyle records earlier this season, won the 100-yard butterfly in a school-record and state-qualifying time of 52.79 seconds, eclipsing the previous record of 53.95 seconds, set by Pat Fell in 2001. Atanasoff best three-time state-qualifier Joe Angotti, who finished second for Southern Cayuga in 53.59 seconds.

Streeter, diving in exhibition, broke his own school and pool records with a score of 278.85, breaking his previous mark of 273.45.

Waverly jumped out to a 12-2 lead with a 1-2 finish in the meet-opening 200-yard medley relay. The foursome of seniors Josh Lee, Nick Janzen, and Brandon Clark, and junior Max Pan won in a time of 1:53.79, and the quartet of freshman Jerrell Sackett, 8th-grader Liam Wright, junior Dillon Madigan, and freshman Oscar Williams was second in 1:54.01.

Wheeler gave Waverly another shot of momentum by defeating defending 200-yard freestyle IAC champion J.D. Rejman with a personal-best time of 1:55.77, which moves him into No. 15 on Waverly’s all-time Top 25. Rejman clocked in at 1:56.65.

Madigan and freshman Ryan Clark finished third and fourth, respectively, in the 200-yard freestyle to up Waverly’s lead to 23-7.

The Wolverines were not challenged the remainder of the meet.

Wheeler and Atanasoff teamed with Lee, and junior Ryan Bennett to win the 200-yard freestyle in a time of 1:33.5.

The duo teamed with Bennett, and junior Collin Keefer to win the 400-yard freestyle in a time of 3:35.88.

Madigan finished third in the breaststroke in a time of 1:08.7.