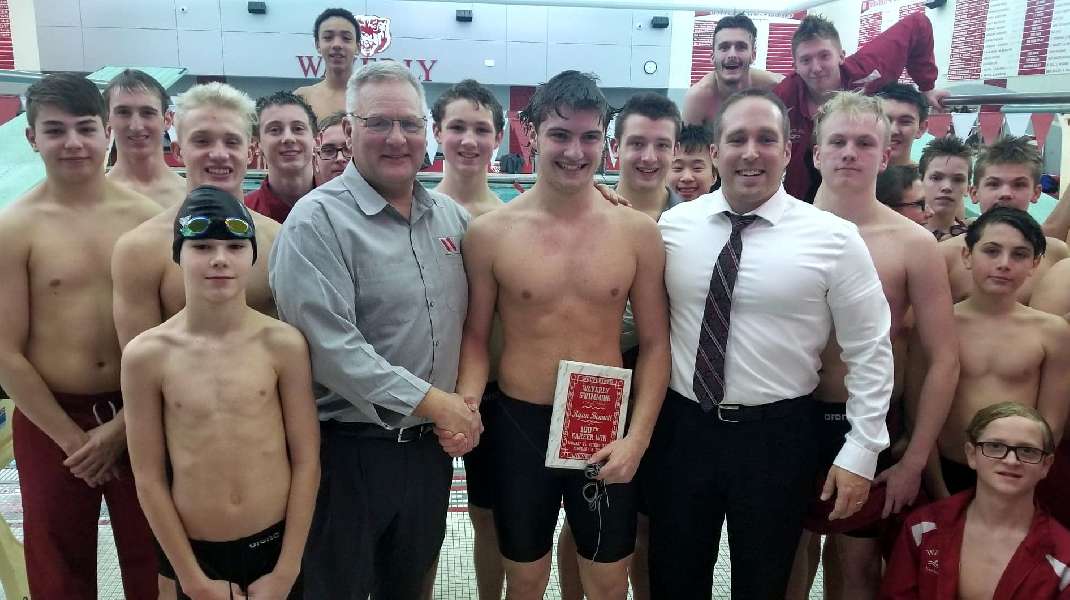 The Wolverines, now 13-0, won all 12 events, including the final three while swimming in exhibition, on Senior Night.

Senior Mike Atanasoff and sophomore Kaden Wheeler won four events apiece, while junior Ryan Bennett won three events, including his 100th career win, and junior Collin Keefer and freshman Jerrell Sackett were double-winners.
“It’s a very nice accomplishment for Ryan,” said Waverly coach Dave Mastrantuono. “He made (Waverly’s all-time) Top 25 in the 50 free with a 22.8 (seconds) earlier in the season and that’s in the state cutline territory. The state cut is 22.1, so for him to be able to challenge a state cutline shows you what he’s been able to do up to this point.

“Achieving 100 wins on the way there, is just icing on the cake,” added Mastrantuono.

Atanasoff teamed with seniors Josh Lee, Nick Janzen, and Brandon Clark to win the meet-opening 200-yard medley relay in a time of 1:57.62, and the Waverly foursome of Keefer, junior Max Pan, Sackett, and freshman Ryan Clark was second in 2:05.54.

Atanasoff and Wheeler teamed with Bennett and Sackett to win the 200-yard freestyle relay in a time of 1:42.91, while the Wolverine quartet of Williams, 8th-grader Liam Wright, junior Dillon Madigan, and Brandon Clark was second in 1:51.12.

In exhibition, Wheeler, Bennett, Keefer, and Williams teamed to win the 400-yard freestyle relay in a time of 4:06.56.

Senior Gage Streeter won the 1-meter diving competition with 236.6 points, and Sackett was second with 154.4 points.

MODIFIED
Nate Chapman was a triple-winner, while Jason Marrone, and Ben Norton were double-winners to pace Waverly’s efforts in the modified meet.

Chapman teamed with Emanuel Miles, Riley Pipher, and Brayden Hurt to win the 200-yard medley relay in a time of 3:28.06.

Chapman also teamed with Jace Sindoni, Jason Peterson, and Nick Mattison to win the 200-yard freestyle relay in a time of 3:05.1.

Pipher was second in the 1-meter diving with 79.75 points.