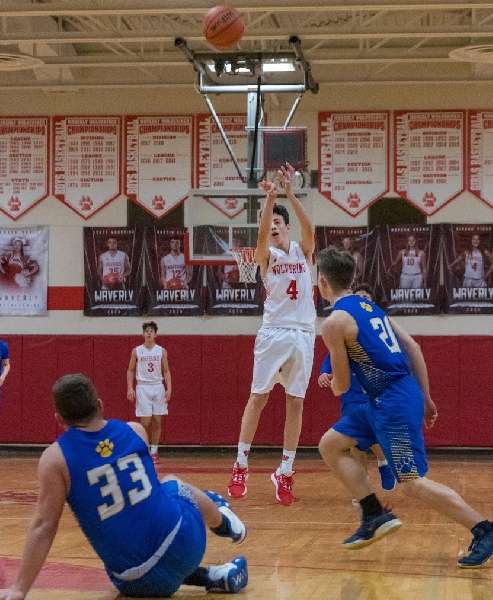 Senior Scott Woodring scored eight points in the first quarter, and junior Aidan Westbrook added four points, while the Wolverine defense limited the Bobcats to one free throw in a 12-1 first-quarter run.

Junior Nick VanHouten buried a pair of 3-pointers in the second quarter, while senior Jalen McCarty and Woodring each knocked down a 3-pointer and scored five points apiece, and junior Peyton Bowen added an old-fashion three-point play in a 22-7 blitz that extended Waverly’s lead to 34-8 at the half.

Waverly coach Lou Judson substituted freely in the second half, with 10 players seeing action in the third quarter, and only two starters seeing time in the fourth quarter.

Woodring made 13 of his 18 shots from the field, and scored 30 points. He also had seven rebounds and three blocked shots.

Westbrook had four points and four boards in the win, while 8th-grader Joey Tomasso chipped in with three rebounds, three assists and two steals, and junior Ryan Lambert dished out three assists.