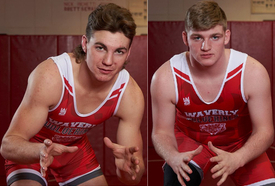 MONTGOMERY — Senior Ethan Stotler and freshman Gage Tedesco won individual titles, and senior Trent Skeens was a runner-up to lead Waverly to a fourth-place finish here Saturday at the MATness at the MAAC.

Sophomore Garrett Skeens was a third-place finisher for the Wolverines, while juniors Trevor Meyers and Austin Kimble, and freshman Connor Stotler were each fourth-place finishers.

Sophomore Jake Bennett and junior Jordan Goodrich both recorded third-place, and freshman Layla Bennett was a fourth-place finisher for Sayre.

Wyoming Valley West won the team title with 149 points, while Jersey Shore was second with 144 points, Montgomery was third with 141 points, and Waverly tallied 124 points. Sayre finished 10th with 46 points.

At 106 pounds, Connor Stotler posted a 2-3 record on the day to finish fourth.

After losing his first two bouts to the top two seeds, Connor Stotler pinned Upper Dauphin’s Noah Smith in 3:30. He caped his day with a pin of third-seed Tyler Budman of Mechanicsburg in 5:10.

At 113 pounds, Layla Bennett was 2-3 on the day to finish fourth, while Waverly freshman Mason Ham was 0-5 on the day.

Both of Layla Bennett’s wins came against Ham. She pinned him in 2:52 in their first bout, then forged a 10-4 decision in the third-place match.

At 120 pounds, Sayre sophomore Cam McCutcheon was 2-3 on the day, and Waverly senior Madison Yeakel was 0-5.

At 126 pounds, Waverly senior Rylan Laforest was 2-3 to finish seventh.

At 132 pounds, Garrett Skeens, the top seed, was 3-1 on the day to finish third, while Sayre junior Jake Burgess was 0-4.

He opened his day with a pin of Wyoming Area’s Nick Ross in 1:47, but dropped a 10-4 decision to Callahan Johnson of Mechanicsburg in his second bout.

Garrett Skeens bounced back with a pin of fourth-seed Zander Ramakes of Wyoming Valley West in 25 seconds.

In the third-place match, he decked third-seed Hunter Leet of Montgomery in 65 seconds.

At 138 pounds, Waverly sophomore Cole Stanton was 1-4, and Sayre junior Bobby Benjamin was 0-4.

Stanton’s lone win was a pin of Benjamin in 1:11 in pool play.

At 145 pounds, Waverly freshman Lilllyparker Ennis was 0-5 on the day.

At 152 pounds, Jake Bennett, the fourth seed, finished 4-1 on the day to finish third, while Austin Kimble, the third seed, was 2-2 to finish fourth.

Jake Bennett opened the day with a pin of Mechanicsburg’s Zach Lamancusa in 25 seconds, then decked Salisbury Township’s Toby Linn in 1:36.

Ethan Stotler won his first three bouts in pool play by fall. He decked Wyoming Valley West’s Cole Williams in 43 seconds, then flattened Mechanicsburg’s Michal Lamancusa in 54 seconds. He capped the run of pins with a 64-second fall of Upper Dauphin’s Connor Dreibelbis.

In the title bout, Stotler earned a hard-fought, 4-2, win over third-seed Haidyn Packer of Jersey Shore.

Wilson’s lone win was a fall of Sugar Valley’s Gavin Vonada in 5:10.

Meyers, the top seed, opened with a pin of Sugar Valley’s Kyle Stahl in 1:43, and followed it up with a pin of Wyoming Area’s Richie Hizynski in 3:48.

Meyers improved to 3-0 with a 10-6 decision over Wyoming Valley West’s Jason Pearson, but dropped a 13-3 major decision to fourth-seed Ben Krauss of Salisbury Township in his final pool play match.

In the third-place match, Meyers dropped a 6-2 decision to third-seed Steven Heck of Upper Dauphin.

At 182 pounds, Tedesco was 5-0, including four pins, to win the title, while Sayre junior Gavin Rucker was 0-3.

Tedesco, the top seed, opened with a pair of first-period falls. He pinned Rucker in 68 seconds in his first bout, then decked Sugar Valley’s Corey King in 1:42. In his final match of pool play, Tedesco pinned Montgomery’s Ben Marino in 2:25.

In the semifinals, Tedesco pinned second-seed Garrett Buckbee of Mechanicsburg in 2:34.

In the finals, Tedesco forged a 9-1 major decision over third-seed Jaden Swainbank.

At 195 pounds, Goodrich, the sixth seed, was 1-2 to finish third in the four-man bracket.

Trent Skeens, the second seed, opened with a pin of Polzella in 1:12, then pinned Jersey Shore’s Seth Webb in 1:35. He finished pool play with a pin of Mechanicsburg’s Malaki Ayala.

In the finals, Trent Skeens lost via fall to Meadowbrook Christian’s Gunner Treibley.

Polzella lone win in pool play win was a fall of Ayala in 1:56.

Waverly returns to action Wednesday in a non-league match-up at Towanda, while Sayre travels to Troy.