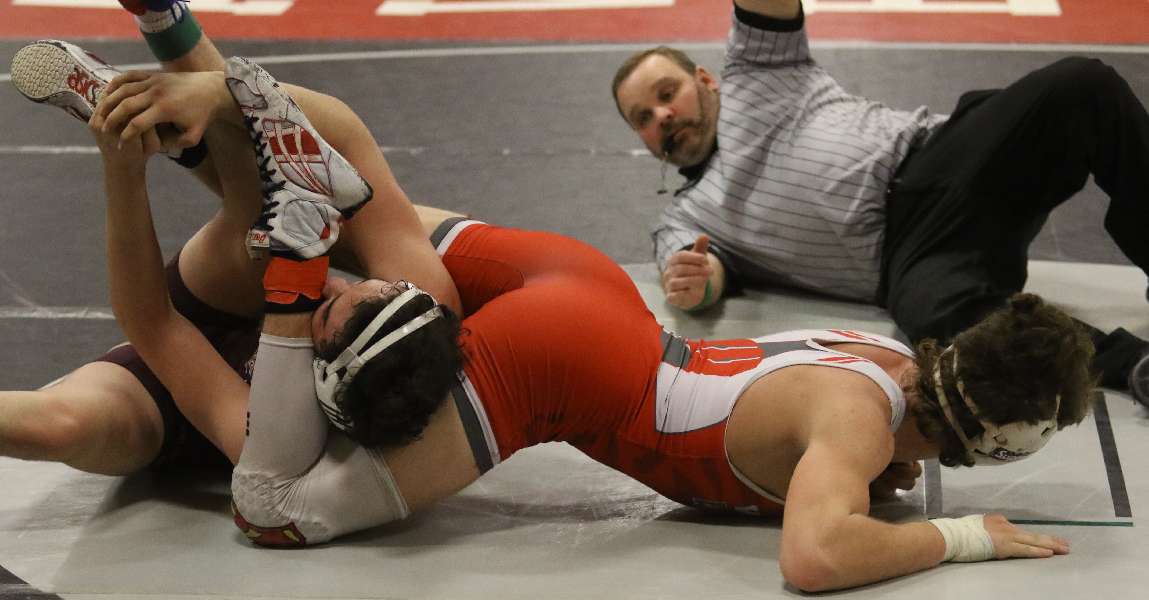 “Now, we have to see what we did right, and what we did wrong, and get back at it,” he added.

Stotler, who has five career top-three finishes in these tournaments, was the top seed, and showed why.

“Ethan was dominant,” said Witman. “He’s looking well past IACs and the qualifier. He has goals in mind, and he’s taking every opportunity when he steps on the mat to get better and better.”

Connor Stotler won his first three bouts before falling to state-ranked Caden Bellis of Tioga in his round-robin bracket.

“Connor wrestled really well today,” said Witman. “He ran into a hammer in the No. 2 ranked kid in the state in (Caden) Bellis, but overall Connor is coming around.

“He’s setting up his shots a lot better, and getting to his finishes,” he added. “He’s going to be one to watch coming down the stretch.”

Trent Skeens, who was the top seed, lost in the semifinals, but wrestled back for third.

“Trent is another one who is getting better every time out. You can see he wants to get better in the room, and it’s showing on the mat,” said Witman.

106 pounds: Connor Stotler was 3-1 on the day, with all three of his wins coming via first-period fall, to finish second in the round-robin bracket.

He opened his day with a 38-second decking of Edison’s Kaleb Bower, then pinned O-M / Watkins Glen’s Morgan Burnham in 1:30.

In a battle of unbeatens in round four, Tioga’s state-ranked Caden Bellis pinned Stotler in 2:35 to take home the title.

113 pounds: Ham was 2-2 on the day to finish fourth in the weight class, while senior Madison Yeakel was 0-2.

Ham was pinned by Marathon’s Edmond Rapp in the quarterfinals, but bounced back with a pin of Yeakel in 4:55, and a pin of O-M / Watkins Glen’s Brandon Davis in 4:54 in his first two wrestleback bouts.

In the third-place match, Rapp bested Ham again, scoring a fall in 1:31.

Laforest opened with a pin of O-M / Watkins Glen’s Gabe Williams in 1:29 in the quarterfinals, but fell victim to state-ranked Kyle Willard of Groton in the semifinals, dropping a 15-5 major decision.

Laforest bounced back in the consolation semifinals with a pin of Dryden’s RJ Belanger in 4:07, then beat Moravia’s Nate Eberhardt via fall in 2:32 in the third-place match.

132 pounds: Sophomore Garrett Skeens, the fifth seed, was 3-2 on the day to finish fifth in a “stacked” 132-pound bracket.

“That’s an insane bracket for a league tournament,” said Witman. “To be six-deep with Sectional place-winners, and kids who are ranked in the State shows that our league is still pretty competitive at some weights, and 132 is definitely one of them.

Garrett Skeens opened with a pin of SVEC’s Tyler Knickerbocker in 1:27, but dropped a 9-3 decision to fourth-seed Sam Dow of Dryden in the quarterfinals.

Garrett Skeens bounced back in the consolation bracket with a pin Lansing’s Anthony McMiller in 1:39.

In the consolation semifinals, Garrett Skeens dropped a 9-0 major decision to third-seed Osumane Duncanson of SVEC. Skeens was a winner in the fifth-place match in a “no contest” over Tioga’s Justin Hopkins, who reached his limit of five matches on the day.

“Garrett (Skeens) wrestled with his head up, and went after it for three periods,” said Witman. “He’s starting to get after it more in his matches.

“If Garrett keeps up his intensity, and keeps working hard in the room, I think he gets some of these matches coming down the stretch,” he added.

In the quarterfinals, Stanton was knocked into the consolation bracket via first-period fall against Dryden’s Bobby Brotherton.

Stanton rebounded in the wrestlebacks with a 27-second decking of Whitney Point’s Grant Smith, and a pin of Marathon’s Tim Morehouse in 3:34.

145 pounds: Waverly freshman Lilyparker Ennis was 0-2 on the day.

Kimble opened with a pin of Gorton’s Shane Smith in 5:18 in the quarterfinals, but Tioga state-ranked Emmett Wood pinned Kimble in 1:52 in the semifinals.

Kimble bounced back in the consolation semifinals with a 5-1 decision over Dryden’s Chis Combs, then dropped a 6-4 decision to Lansing’s Gabe Stevens in the third-place match.

160 pounds: Ethan Stotler was dominant in posting a 3-0 record to win the 160-pound weight class.

He opened the day with a pin of Moravia’s Trenton Wells in 60 seconds in the quarterfinals.

Stotler is 27-1 on the season, and ranked fourth in the State.

Meyers opened with a 17-2 technical fall of Moravia’s Garrett Kuhn, then pinned Tioga’s Josh Snell in 63 seconds in the quarterfinals.

In the semifinals, Dryden’s Vincent Scott locked in a cradle for a pin of Meyers in 2:49.

In the consolation semifinals, Meyers topped SVEC’s Nick Tubbs, 6-2, then pinned Marathon’s Trevor Hurlbert in 2:36 in the third-place match.

285 pounds: Trent Skeens was 3-1 on the day, with all three victories coming via first-period falls, to finish third, while junior Kam Peters was 2-2 to finish fifth.

Trent Skeens opened the day with a 34-second decking of Edison’s Spencer Meriwether, but came up on the bottom on a “big man’s roll” against Marathon’s Quinton Sengsounthone, losing by fall in 50 seconds.

In the consolation semifinals, Trent Skeens pinned Peters in 1:41, then flattened Groton’s Demetry Brooks in 50 seconds in the third-place match.

Peters was pinned by Brooks in 69 seconds in his first bout, but bounced back with a pin of Marathon’s Logan Jamison in 2:41 in his first wrestleback bout.

After his loss to Skeens in the consolation semis, Peters pinned Moravia’s Donald Garrow in 26 seconds in the fifth-place match.