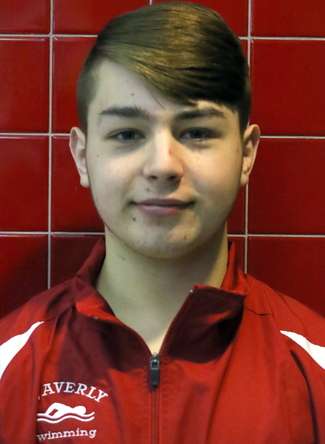 ENDWELL — Waverly senior Gage Streeter was not ready for his high school career to come to an end, and he kept it going in record-setting and dramatic fashion.

The Wolverine diver scored more than 100 points on his final two dives to end the 1-meter diving competition with 454.85 points, surpassing the State cut of 450 and qualifying for States at the Section IV Diving Championships here Thursday afternoon at Maine-Endwell High School.

In the process, Streeter, who finished second on the day, broke his own school record of 449.6 points, which he set here last year. It was a bittersweet record last year as Streeter missed the state cut of 450 by just 0.4 points.

On his final dive, a forward 2 1/2-summersault, Streeter needed scores of at least 7, 7, and 6 from the three judges. He scored 7.5, 7.5, and 7 to pass the state cut, and qualify for States.
Streeter is the first Waverly diver to qualify for States since 1995.

Streeter will now compete at the New York State Championships March 6-7 at the Nassau Cunty Aquatic Center on Long Island.