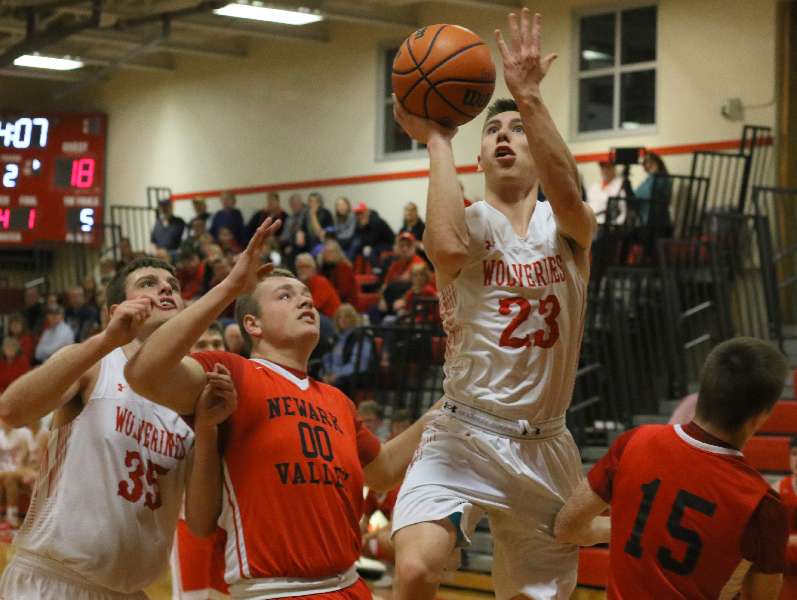 WAVERLY — Six-foot, eight-inch senior Scott Woodring was held to a season-low eight points, but several of his teammates stepped up to carry Waverly to a 60-44 win over Newark Valley here Tuesday night in IAC South Large School boys basketball action.

Judson credited Newark Valley’s defense, but also noted his team, including Woodring, has been battling sickness.

“We have a couple guys who have been sick, both our team captains — Jalen (McCarty) and Scotty (Woodring), and that gets you out of rhythm.

“I was pleased, though, with how certain guys stepped up, especially in the first half,” said Judson. “I thought Peyton Bowen played a very good game for us tonight.

“And, Joey (Tomasso) has been solid the last two basketball games,” noted Judson. “I think he’s playing with a lot of confidence right now, and he’s looking for his offense a little more than he was earlier in the season, and we need him to.

“We didn’t have our best tonight, but we had enough to win,” added Judson. “We just need to get healthy for Friday.”

Newark Valley coach Scott Stratton said his team was focused on Woodring, who entered the game averaging 27.2 points and 13.6 rebounds per game, and had 26 points and 12 rebounds in Waverly’s win at NV earlier in the season.

“I’m sure everybody focuses on Scotty (Woodring) coming into any games against Waverly,” said Stratton. “Jake Armstrong is such physical presence for us, he’s perfect for a job like that.

“In the first game, I thought Jake did a really nice job on him,” noted Stratton. “We used a slightly different defensive scheme in the first game, but tonight, going man against them and having Jake guard (Scotty), and body him everywhere … it made all the difference. He kept Scotty off the boards, and forced him out (of the paint) once in a while.

“But, they had guys hit shots, and you’re going to have to live with that,” added Stratton. “If you help on Scotty, someone is going to be open.”

Waverly started a bit slow, and committed several turnovers attempting to get the ball to Woodring in the paint.

“Early on in games lately, we’ve been looking to Scotty too often, and teams are obviously game-planning for us to look inside,” said Judson. “We need to utilize that, and get him the ball in different ways. We’ve been working on that in practice, putting some different wrinkles in.

“We need to do a better job of choosing when to get the ball to him,” added Judson.

Tomasso scored 10 points, including a 3-pointer, in the first quarter, and senior Jalen McCarty canned a 3-pointer to help Waverly to a 19-9 lead.

Newark Valley’s Ethan Bigelow scored at the first-quarter buzzer to cut the deficit to 19-11 after the first eight minutes.

Ryan Bowen canned a pair of 3-pointers and scored eight points for the Wolverines in the second quarter, and Woodring added four points, while Caden Bennett scored five for the Cardinals and Jaden Short drained a 3-pointer. Waverly led 35-23 at the half.

Aidan Westbrook turned a pair of steals into uncontested lay-ups for the Wolverines, and McCarty scored a pair of buckets in a 10-0 run late in the third quarter that extended the lead to 48-29. Waverly led 50-31 entering the final eight minutes.

The Cardinals trimmed the deficit to 12 points late in the fourth quarter, but could get no closer.