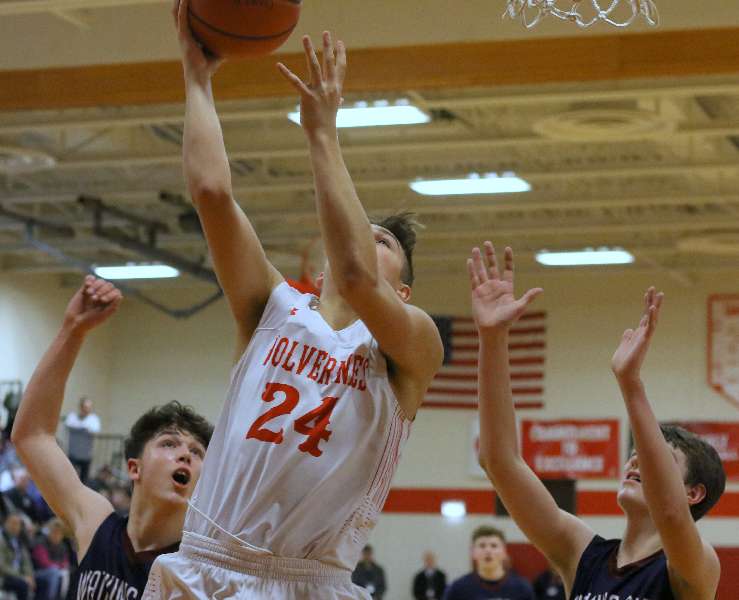 Those are just a few adjectives you could use to describe Watkins Glen’s 48-43 IAC boys basketball win over Waverly here Tuesday night. A decision that leaves the two teams tied atop the Large School Division standings.

“Missed opportunities,” he said. “Throughout that fourth quarter, we’d get a good offensive rebound, or we’d make a good play, and we weren’t finishing around the rim.

“We just didn’t make the plays down the stretch that championship teams do,” said Judson. “It’s a game that got away. We had opportunities late in that game to either get fouled and go to the line, or to make a play, and we just didn’t.

“We just weren’t strong with the basketball. Some calls weren’t being made, but that happens in close games, we just have to play through it, and I don’t think we played through it all that well,” added Judson. “Hopefully, we learn from it.”

Eighth-grader Joey Tomasso canned a 3-pointer with 5:50 remaining in the first quarter to give the Wolverines a 7-4 lead.

Junior Ryan Bowen drained a 3-pointer with 2:15 left in the first quarter to give Waverly its biggest lead of the game, at 12-6.

The Senecas chipped away and eventually tied the game at 16-16, on a driving lay-up by Isaac McIlroy with 5:12 remaining in the first half, but moments later Woodring pulled up in transition and nailed a 3-pointer to give the Wolverines a 19-16 lead.

The Senecas answered with back-to-back buckets by Owen Scholtisek and Jacob DeJong to take a 20-19 lead with 3:45 remaining in the first half.

The remainder of the first half was a flurry of lead-changes with Watkins Glen taking a 26-25 lead into the halftime locker room on a shot-clock, buzzer-beating 3-pointer by McIlroy with 4.3 seconds left.

Bowen knocked down a 3-pointer with 1:43 left in the third quarter to give the Wolverines a 35-34 lead, but McIlory scored in transition with 18 seconds left to give the Senecas a 36-35 lead entering the final eight minutes.

Adam Pastore gave Watkins Glen a 38-35 lead just 30 seconds into the final stanza, but senior Scott Woodring scored a pair of buckets on putbacks on the offensive glass, sandwiched around a fast-break lay-up by junior Griffen Stein, in a 6-0 spurt to give Waverly a 41-38 lead with 6:05 remaining in the game.

Woodring knocked down a short jumper with 4:12 left in the game to give Waverly a 43-40 lead, but the Wolverines would not score again.

McIlroy scored on a breakaway lay-up with 2:18 remaining to cut the deficit to 43-42, but neither team scored over the next 90 seconds, which featured a flurry of turnovers.

With 32 seconds remaining, Max Evans gave the Senecas the lead for good, at 44-43, with a driving lay-up.

McIlroy added four free throws in the final 15 seconds to salt the game away.

“I thought we played well defensively,” said Judson. “We held them to 26 points in the first half, and it was 43-42 us with 40 seconds to go. They got 48 points because they made some free throws down the stretch.

“Defensively, we’re solid, and we played really well,” he noted. “Offensively, I need guys to step up, and play up to their potential. Right now, we have guys who are lacking a little self-confidence, but that will come with some success on the court.

“The good thing is we’re still tied (for first) in our division, with one game to play for us, and two for them,” added Judson. “And if there’s a playoff, it’s on our floor.”

Waverly, now 13-3, returns to action Thursday against Thomas A. Edison at the First Arena.