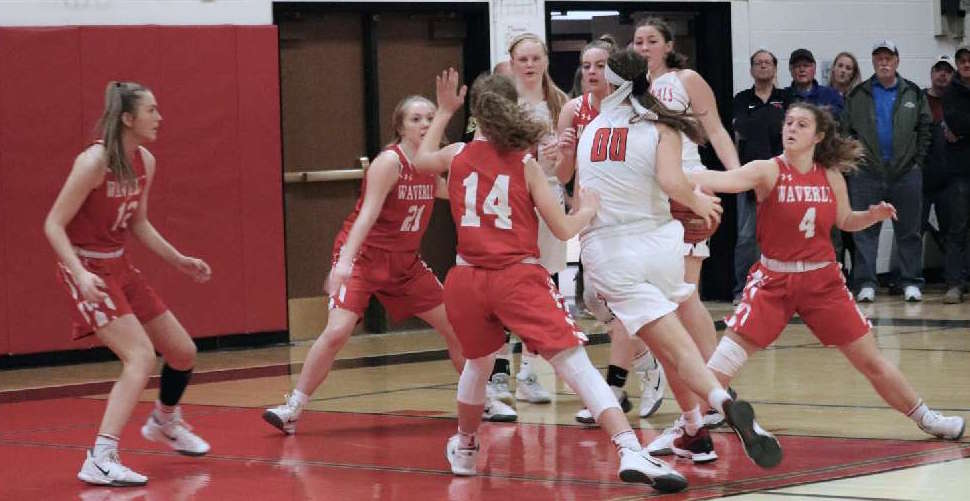 NEWARK VALLEY — Newark Valley held the Waverly offense in check early and gradually pulled away for a 55-37 victory in the Section IV Class B girls basketball playoffs here Saturday evening.

The unbeaten Cardinals, ranked fourth in the state, grabbed a 12-6 lead after one quarter of action on the strength of four points from Mackenna Nechwedowich, and one 3-pointer each by Bri Beebe and Kendra Morris. Sidney Tomasso had four of the Wolverines' points.

Allie Wandell scored half of NV's second-quarter points as it built a 28-18 lead at the half. Gracie Gardner added four more. Paige Lewis sank four free throws to pace Waverly in the period.

The Cardinals came out of the break and threw down a trio of treys, by Beebe, Hannah Ferguson and Taylor Benjamin, to increase their lead to 41-28 heading into the final frame. Ferguson had five of NV's points. Lourden Benjamin had a three for Waverly.

Ferguson would knock down two more threes in the fourth quarter and Beebe added another, giving both players three apiece. The Wolverines received a trey from Emma Adams, and three points apiece from Tomasso and Lewis.

NV had four players score in double figures, including a pair of double-doubles. Nechwedowich blocked 12 shots and scored 10 points while Wandell pulled down 13 rebounds to go with 10 points. Nechwedowich also contributed seven boards, two assists and two steals, and Wandell had a blocked shot.

Waverly ends the season with a 15-5 record.