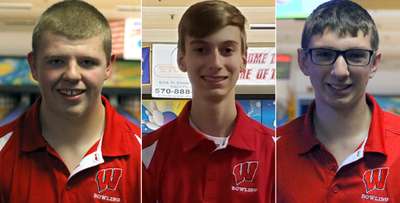 WAVERLY — A trio of Waverly boys rolled 600 series in a sweep of Newark Valley that propelled the Wolverines into first place in the IAC Large School standings here Thursday afternoon, while the Lady Wolverines swept the short-handed Lady Cardinals in bowling action at the Valley Bowling Center.

Freshman Ashton Pritchard rolled a 527 in the sweep, while junior Richard Stevens added a 501, and sophomore Cody Blackwell tacked on a 470.

Freshman Ethan Roberts shot a 551 in reserve for the Wolverines.

Alex Umiker shot a 607 to lead Newark Valley, and John FIacco added a 554.

GIRLS
Waverly 4, Newark Valley 0
Freshman Victoria Houseknecht rolled a 607 series on games of 211, 196, and 200 to lead the Lady Wolverines to a sweep of Newark Valley, which only had three bowlers.

Eighth-grader Rachel Houseknecht shot a 554 for Waverly, while senior Morgan Lee had a 478, freshman Shantilly Decker had a 442, senior Sadie VanAllen added a 433, and senior Megan Lee tacked on a 398.