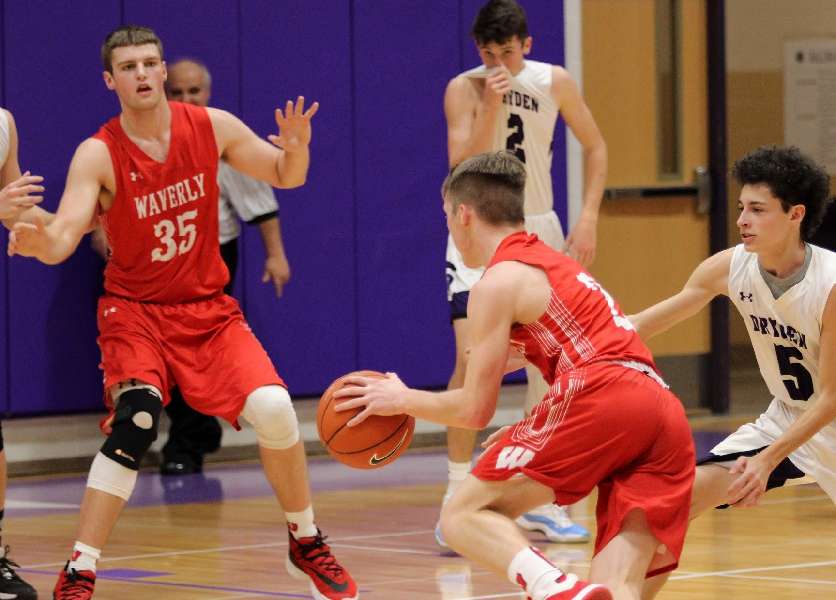 “It was a total-team effort tonight. I thought we played pretty good in all phases of the game,” said Waverly coach Lou Judson. “I know Dryden is struggling this year, but we still showed up tonight and played a pretty solid basketball game.

“We shot the ball extremely well tonight, which we haven’t been doing. And, it wasn’t the guys you might expect tonight.

“Nick VanHouten came off the bench early, and hit four 3s for us,” noted Judson. “Kobe Decker played a very good second half. They combined for 25 points … I was very pleased with the guys who came off the bench tonight, they seemed very focused.

“It was a good opportunity for them to get into a game, and they made the most of it,” added Judson.

Junior Nick VanHouten canned a pair of 3-pointers in the second quarter, and junior Aidan Westbrook added five points, including a 3-pointer, in a 23-8 blitz that gave the Wolverines a 43-20 lead at the half.

Junior Kobe Decker scored seven points, including a trey, while VanHouten hit two more 3-pointers, and five other Wolverines put their names in the scoring column in a 29-point outburst in the third quarter that extended the lead to 72-34 lead heading into the final eight minutes.