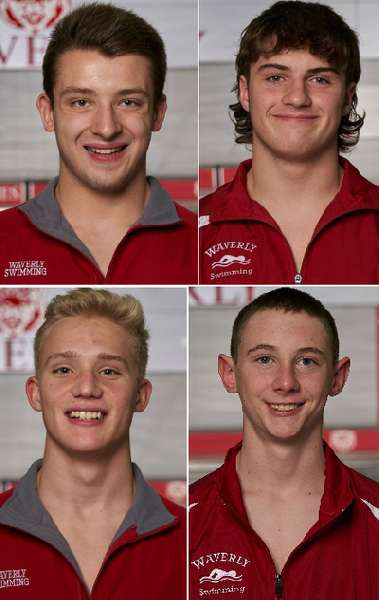 Bennett won the 50-yard freestyle in a time of 24.03 seconds, and freshman Jerrell Sackett was second in a personal best time of 24.6 seconds.

Bennett also won the 100-yard freestyle in a time of 54.83 seconds, and senior Brandon Clark was third in 57.03 seconds.

Atanasoff, Wheeler, Bennett, and Brandon Clark teamed to win the meet-opening 200-yard medley relay in a time of 1:53.04

Atanasoff, Williams, Bennett, and Brandon Clark teamed to win the 200-yard freestyle relay in a time of 1:41.21, and the foursome of Janzen, Sackett, Madigan, and Wright was second in 1:47.43.

Williams, Wheeler, Keefer, and Janzen teamed to win the meet-closing 400-yard freestyle relay in a time of 3:59.68.

In exhibition, senior Gage Streeter won the 1-meter diving competition with 255.3 points, and Sackett was second with 145.4 points.