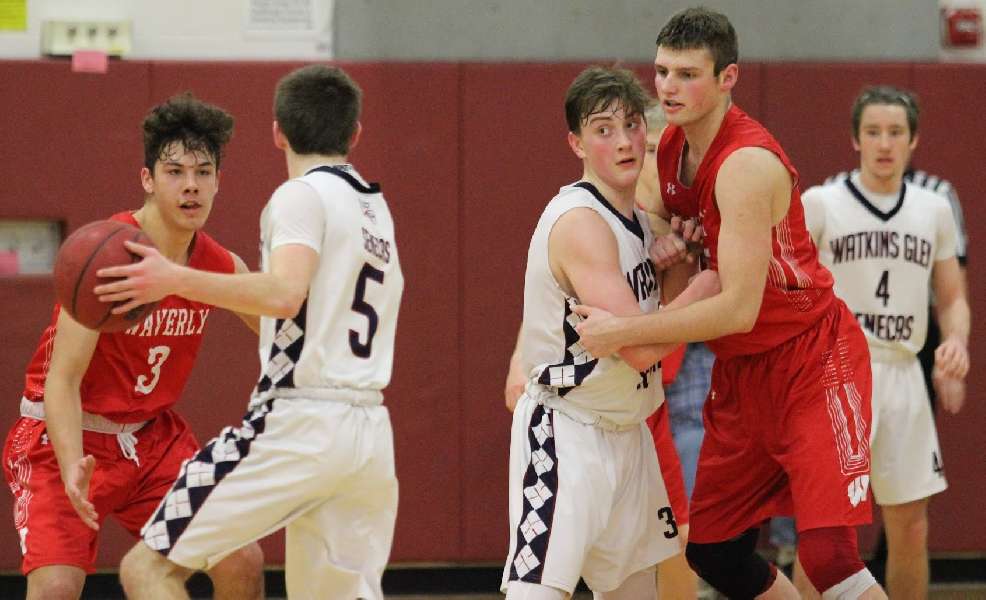 With the win, the Wolverines (11-2 overall) improve to 7-1 in divisional play and take sole possession of first place. Watkins Glen drops to 11-2 overall, and 6-2 in league play.

“It was a great environment to play in tonight, and it was an absolutely huge win for our team, especially coming off a poor performance at home against Whitney Point,” said Waverly coach Lou Judson.

“We were locked in defensively, pretty much the entire game,” he noted. “We held them to 14 points in the first half, that’s about as good as we can play defensively.

“I’m really proud of them tonight,” Judson added. “We executed what we needed to do tonight, and we made enough plays down the stretch to win the game.”

Waverly closed out the first quarter with an 8-0 run, thanks to five points by senior Scott Woodring, and a 3-pointer by 8th-grader Joey Tomasso, to take a 15-7 lead.

Woodring scored four points in the second quarter, and Tomasso knocked down his third 3-pointer of the half to help the Wolverines to a 26-14 halftime lead.

Woodring led Waverly with 25 points, 16 rebounds, two assists, and one blocked shot, and Tomasso added a career-high 15 points, including four 3-pointers on seven shots from behind the arc.

“We’ve been struggling to get a second or third scorer,” said Judson. “Joey Tomasso had a career night tonight with 15 points — four 3-pointers, three in the first half. He was huge for us offensively.”

The Wolverines also enjoyed an advantage on the boards.

“We went big tonight because I thought we got beat up on the glass, rebounding the ball against Whitney Point,” said Judson. “I tried to go as big as we can, and I think that threw (Watkins Glen) off a little bit.

“We were getting more rebounds, and giving ourselves a few more opportunities,” he added.

Waverly saw its lead to shrink to eight points midway through the fourth quarter, but a quick 8-0 spurt gave the Wolverines a 50-34 lead with 2:47 remaining in the game.

Waverly returns to action Tuesday when it hosts Newark Valley.