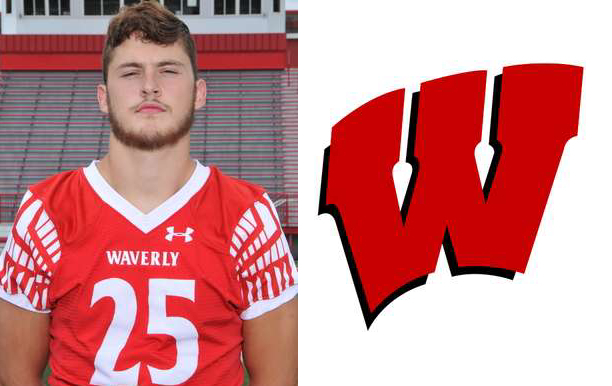 Hallett recorded 98 tackles in nine games this season, an average of 10.9 per game, including 38 solo tackles. He also had one interception, and one fumble recovery.

“David is one of the hardest workers I’ve had over the course of 20 years, and has worked to become a very good defensive player for us.

“He’s always a physical presence around the football,” said Miller. “He thrived being up in the box, as opposed to being back at free safety.

“He’s very physical, very strong, and he has great speed,” noted Miller. “He has all the great tools on defense to get to the football, and when he gets there, he usually lays a good hit on you.

“He’s very motivated to become a better football player, and is very deserving of all-state honors,” added Miller. “I’m happy we’ll have him back next year.”

McCarty led the Wolverines with 38 receptions for 450 yards and five TDs, and also rushed for 99 yards and one TD on 24 carries.

“Jalen had a super year on both sides of the ball,” said Miller.

“He was able to catch the ball in tight windows, and did some good things with the ball after he caught it. He had big-play potential,” noted Miller. “He ran a lot of our vertical routes down the middle, which are not easy balls to catch.

“He ended up becoming a very good football player, and he became a good leader for us,” continued Miller. “He fits right in with a lot of good receivers we’ve had over the last 10 to 15 years.

“He’s certainly deserving of the honor, and I’m proud of him,” he added.