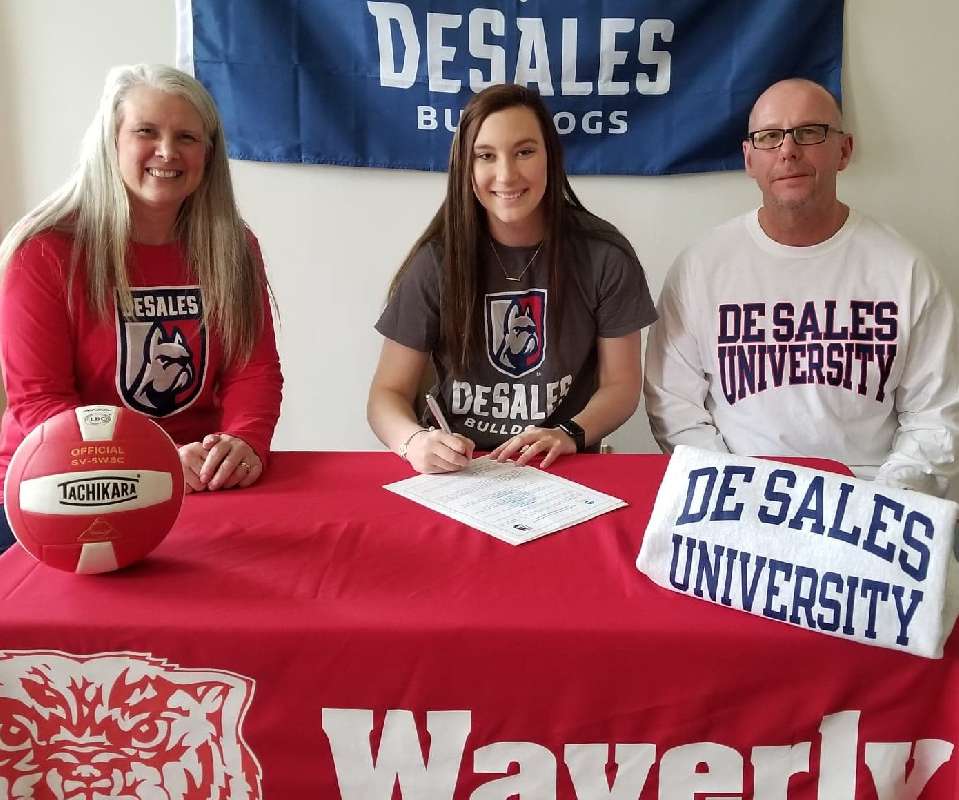 “DeSales is a high-caliber Division III volleyball program, and they also have a hands-on learning program,” said Lewis, who will major in Sports & Exercise Philosophy, which is part of the physical therapy program.

“We won’t have any seniors next year because several of the girls were (in the three-year program),” Lewis added.

Lewis was impressed by the camaraderie surrounding the volleyball program during her visits.

Lewis said she’s not sure where she’ll playing.

“They like my versatility — how I can play outside or the middle,” she said. “They said I could be a powerful outside hitter for them, or I could also be an easy middle, who can get the steps in and go for it.”

She said getting use to playing at the next level will be her biggest adjustment.

“I need to work on going at a faster tempo,” said Lewis. “The high school game is slower. I have to make myself quicker, and get use to speed of the game.”

Former Waverly volleyball coach Kesha Sinsabaugh, who stepped down after the 2019 season, said Lewis needs to focus on the mental aspect of the game.

“Keeping her head in the game will be key for her,” said Sinsabaugh. “She know’s that, it’s been the thing we’ve focused on for the five years she was with me.

“She can dominate the court, as long as she keeps her head,” Sinsabaugh added.

Sinsabaugh has little doubt Lewis will be successful at the next level.

“Her strong suit, is she doesn’t give up,” said Sinsabaugh. “She likes to practice, and she works hard.

Like so many of her peers, Lewis sums up the quarantine, and he shut down of schools and athletics, including travel volleyball, succinctly.

“I’d like to see my friends, and finish my senior year,” she said. “Who knows if we’re going have a senior trip, or even a graduation. I want a (graduation ceremony), so I can see my friends one last time before we all disperse.”

Lewis is also missing her senior softball season, and her travel volleyball season.

“Our (softball) team is very close, it sucks that we may not have a season.

“And, it’s cut our travel (volleyball) schedule short,” noted Lewis. “Regionals was coming up, and everyone that plays travel would be there, and college coaches came come to that too, so I would have seen the DeSales coach and the assistant coach and talked to them.

“I just want to hit a volleyball … I want to be active,” added Lewis. “I miss it, I love playing more than one sport at a time.”