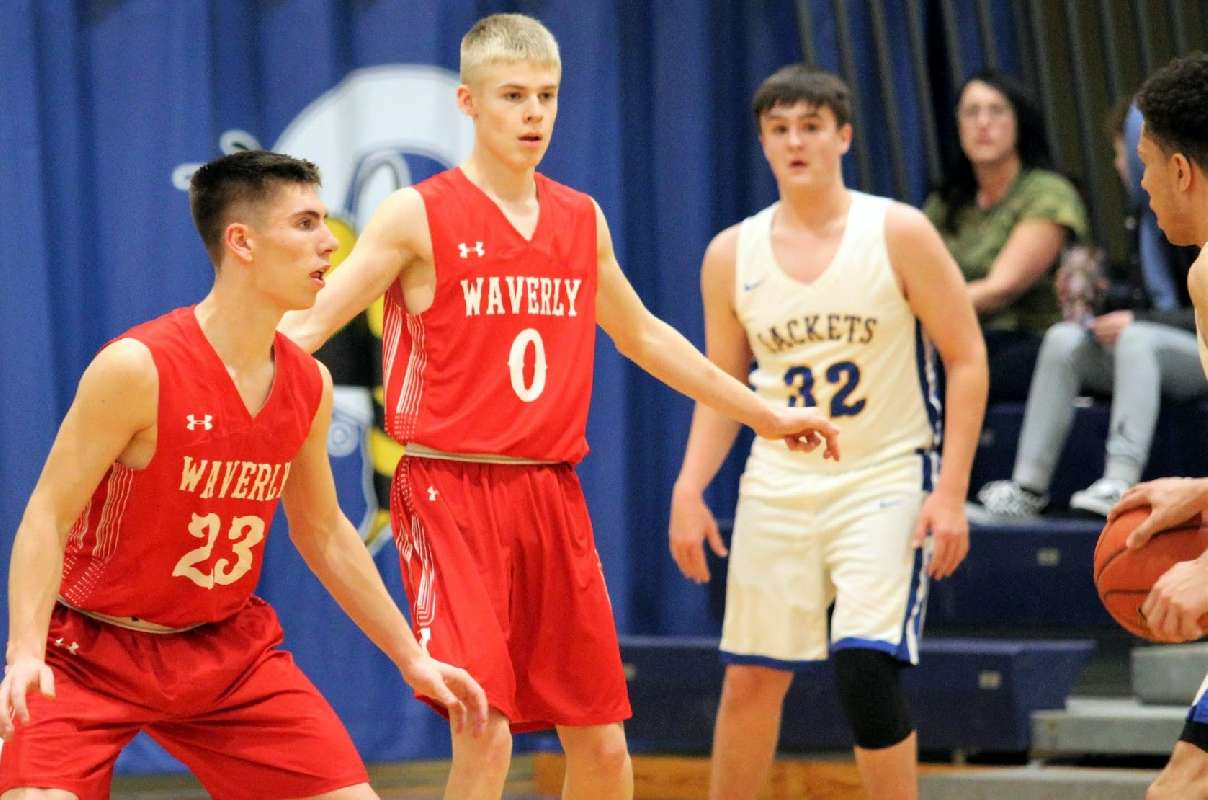 ONEONTA — Senior Scott Woodring closed out his high school career with another monster double-double, but it wasn’t enough as fourth-seeded Oneonta ousted fifth-seeded Waverly from the Section IV, Class B boys basketball playoffs with a 65-53 win here Friday night.

Woodring, who knocked down 16 of 24 shots from the field, poured in 36 points, and pulled down 13 rebounds. Woodring finished the season with a single-season school-record 552 points.

“Scotty was huge tonight against a very good Oneonta big (man) inside,” said Waverly coach Lou Judson. “(Scotty) just manhandled their inside game tonight. He was dominant, and played one of his best games from the field. He was very efficient.

“He went out and ended his career on a high note,” noted Judson. “I can’t say enough about Scotty … he’s a class act. He goes about his business and is a leader.

“I know he’s going to do special things at the next level because of his work ethic, and his dedication to basketball and in the classroom,” he added.

It’s the fourth time in Judson’s tenure the Wolverines have had their season end in the postseason at Oneonta.

“Oneonta is good. They are really good on their home floor. It’s a very tough place to play,” said Judson.

Oneonta closed the first quarter with five straight points to take a 20-12 lead.

“To be honest, I subbed out some of our starters, and I don’t know if they weren’t ready to play, or the moment was a little too big,” said Judson of the mini-run to end the first quarter.

“We’re young and inexperienced at certain positions, and that kind of got us tonight,” he noted.

“(Oneonta) had an experienced point guard who made plays when they needed them, and we had some inexperienced guys commit some turnovers at inopportune times that hurt us,” Judson added. “We couldn’t maintain any type of momentum we had.”

The Yellowjackets stretched their advantage to 38-25 at the half, but Waverly chipped away at the lead in the second half

Woodring, who had 18 points in the first half, pumped in 11 points, including a 3-pointer, in the third quarter, and 8th-grader Joey Tomasso knocked down a 3-pointer in a 19-13 run that trimmed the deficit to 51-44 entering the final eight minutes.

The Wolverines trimmed the Oneonta lead to five points early in the final stanza, but back-to-back 3-pointers by Kevin Kurkowski and Graham Wooden pushed the lead to 11 points.

“We were playing great defense … they had a broken play, and a loose ball rolls to one of their role players (Kevin Kurkowski) and he hits a 3,” said Judson.

“We go down court and don’t score,” added Judson. “(Oneonta) goes down and hits another 3 (Graham Wooden), and that’s pretty much the nail in the coffin.”

“We had our chances, we just didn’t make enough plays down the stretch,” said Judson.

Wooden led Oneonta with 24 points, while Zyeir Lawrence added 16 points, and Khi Aitchison added 14, including a trio of 3-pointers.

The Wolverines finish off the season at 15-6.

“Before the season, I always write down what I think our record will be, and I was very close,” said Judson. “I would've liked to have thought we would win our division, and overall league title. We were probably one possession away from that happening.

“It was a special season. The kids played extremely hard.

“I’d say the key moments were beating Athens in the Valley Christmas Tournament, and playing in front of some big crowds against Watkins Glen at home late in the season,” added Judson.

The longtime Waverly coach believes the future is bright for the Wolverines.

“I’d like to see some of our guards on the perimeter develop an overall game, from shooting to making some individual moves, and making plays off the bounce,” he said.

“I think we have some kids coming through the JV program that will help there as well.

“I look forward to the next couple years. I think we have some nice pieces that will fit in nicely with what we have returning,” added Judson.

Woodring isn’t the only senior Judson will miss.

“It’s bittersweet because we’re losing Scotty and Jalen (McCarty), who just three years ago was wrestling and who has made himself into a very good basketball player at the high school level,” noted Judson. “He’s a tenacious defender.”