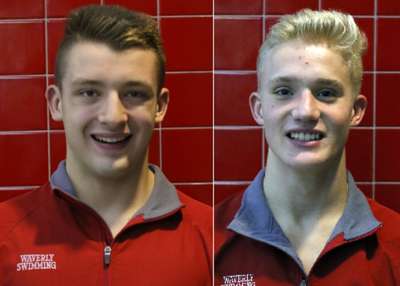 Junior Collin Keefer hit a key milestone with his 100th career win, while freshmen Jerrell Sackett and Simon Stevens each registered their first varsity win as the Wolverines won 11 of 12 events to improve to 8-0 on the season.

Atanasoff teamed with Bennett, Keefer, and Brandon Clark to win the 400-yard freestyle relay in a time of 4:02.81.

Sackett won the 50-yard freestyle in 25.81 seconds, while freshman Oscar Williams was second in 25.86 seconds, and junior Max Pan was third in 27.84 seconds.

Senior Gage Streeter won the 1-meter diving competition with 232.4 points, and Sackett was second with 125.4 points.

Waverly returns to action Thursday when it hosts Lansing.

Hurd and Grover teamed with Nate Peters, and Ben Norton-Lantz to win the 200-yard freestyle relay in a time of 2:52.2.

Pipher won the 1-meter diving competition with 67.7 points. He was second in the 50-yard breaststroke in a time of 50.83 seconds.