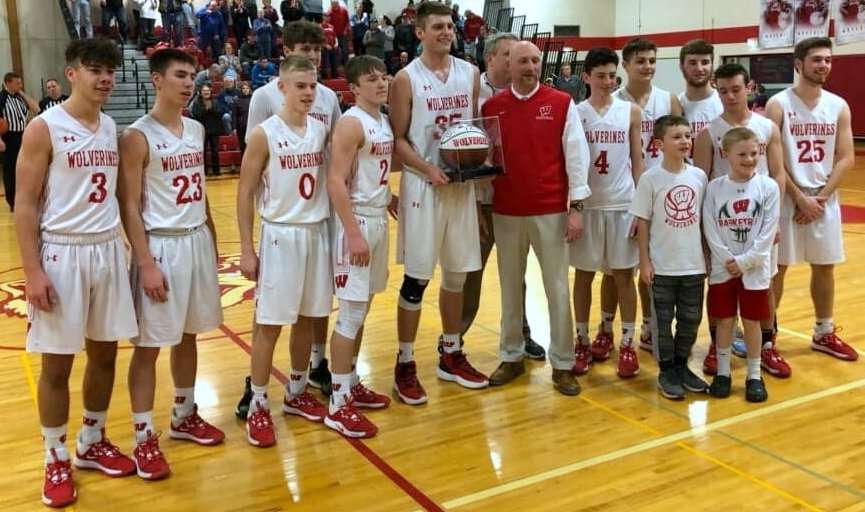 WAVERLY — Senior Scotty Woodring turned in another outstanding performance, including his 1,000th career points, but it wasn’t enough as Chenango Forks used a big fourth quarter to pull out a 58-47 decision here Saturday night in non-league boys basketball action.

The Wolverines led 38-36 after three quarters, but Forks used a 22-9 run in the final eight minutes to collect the victory.

“We were up two going into the fourth quarter, and down one with three minutes remaining, but the game got away from us,” said Waverly coach Lou Judson. “We just couldn’t make enough plays to keep up with them down the stretch.

“I don’t think we were use to the overall physicality of the game,” added Judson. “Chenango Forks is a very physical team.”

Forks led 14-8 after the first quarter, but Woodring, who had just two points in the first eight minutes, scored a bucket early in the second quarter for his 1,000th career point.

Woodring scored 12 more points in the second quarter, including a pair of 3-pointers, for all his team’s points in a 14-7 spurt that gave the Wolverines a 22-21 lead, but Forks scored at the halftime buzzer for a 23-22 lead at the intermission.

“It was a great defensive effort on both sides in the first half,” said Judson.

Woodring scored 14 more points in the third quarter to fuel a 16-13 advantage that gave Waverly a 38-36 lead entering the final eight minutes.

Woodring, who scored 30 of Waverly’s 38 points in the first three quarter, scored six more points in the fourth quarter, but CF’s Marcus Hanyon scored 10 points, including a 3-pointer and an old-fashioned three-point play, in the final stanza to spark the decisive run.

Woodring pumped in 36 points, pulled down 24 rebounds, and blocked five shots for the Wolverines.

“Scotty had an outstanding performance tonight against two guys for Forks who are 6-4 and physical specimens.

“He kept us in the game, we just didn’t have a supporting cast making any shots tonight,” said Judson, noting his team’s guards were 4-for-20 from the field. “We struggled shooting the basketball.”

“We just didn’t anyone scoring other than Scotty. No one else had more than five points,” noted Judson.

“Some times we have those types of games, and, unfortunately, we’ve had a couple against pretty good basketball teams,” he added.

“It is amazing. I would really have liked to see where he could have been at if he had been healthy last year,” said Judson. “He’s had an outstanding high school basketball career. To score 1,000 points in just 49 games is pretty special.

“Hard work definitely pays off,” noted Judson. “He is one of the hardest working players I’ve ever had. Everything accolade he receives and accomplishment he achieves is definitely earned.

“He handles himself so well, it’s just remarkable,” added Judson.