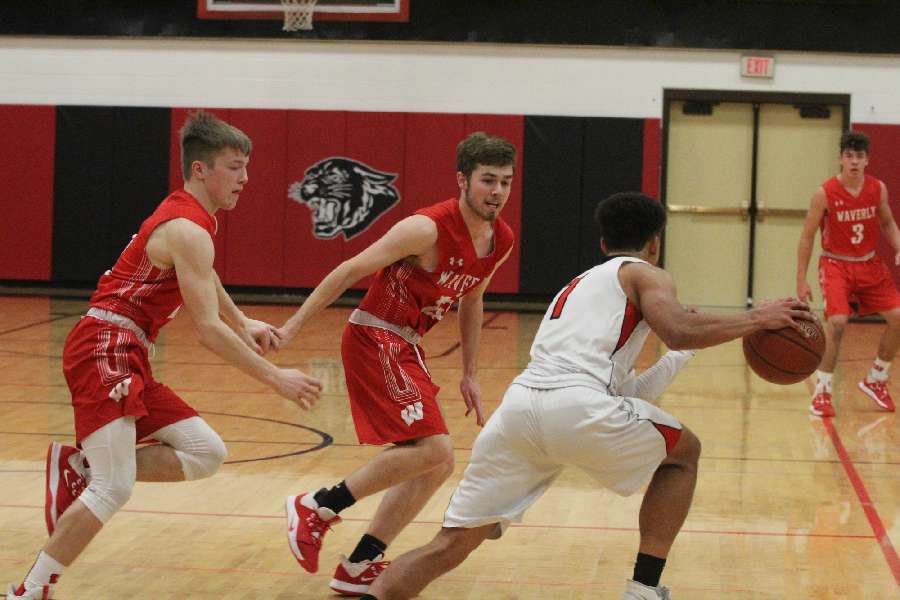 “I’d like to see us start games a little bit better than we have been,” said Waverly coach Lou Judson. “For some reason, we come out of the gate not playing well in the first quarter, then we wake up and usually play a good second quarter, and usually finish off the game OK.

“We made some plays out in transition and when we went to the press, I think that's what really kind of got us going,” he noted.

“And, I really thought we fed off of Aiden Westbrook's energy in the first half,” added Judson. “He was all over the place.”

Matthew Byrne buried a 3-pointer and scored seven points in the first quarter, while Markus Brock had five points, including a trey, and Matthew Merrick added a 3-pointer to help the Panthers to a 17-15 lead after the first eight minutes.

Woodring, who had six points in the opening stanza, pumped in 12 points in the second quarter to fuel a 19-5 run that gave the Wolverines a 34-22 halftime lead.

Woodring scored 11 more points in the third quarter to help up their lead to 16 points, at 49-33, entering the final eight minutes.

Senior Austin Ellers and junior Nick VanHouten each canned 3-pointers in the fourth quarter, and the Wolverines made 9 of 12 free throws down the stretch to seal the victory.

“We were a little sloppy in the second half,” said Judson. “There were too many turnovers, but all in all, you've got to be happy with a 20-plus point win on the road at Spencer where it's very difficult to play.”