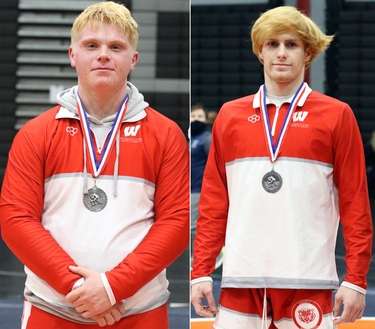 The Wolverines finished seventh in the 10-team field with 78 points, well off the pace of team champion Canisteo-Greenwood, which tallied 235 points. Athens was second with 158.5 points, and West Scranton was third with 141.5 points.

Hills finishes second at 152 pounds
Hills pinned his way to a 4-0 mark in pool play.

Hills opened with a pin of Scranton's Matt Schilling in 3:36, then decked Wilson's Cameron Thatcher in 54 seconds.

He kept it rolling with a pin of the pool's top seed, Canister-Greenwood's Carson Turner in 3:53, and closed out pool play with a pin of West Scranton's Mason Bennett in 3:13.

In the title match, Hills dropped a 16-1 technical fall to Canister-Greenwood's Braidon Woodward.

Troy Beeman opened with a pin of Canister-Greenwood's Hayden Lewis in 68 seconds, then forged a 10-4 decision over West Scranton's Calden Berardi.

Troy Beeman lost via fall to eventual champ Camden McConnell of Corning in 2:40 to close out pool play.

In the semifinals, Ty Beeman pinned Troy Beeman in 1:56 to advance to the finals, where he dropped a 5-0 decision to McConnell.

Troy Beeman bounced back with a pin of Hayrabal in 46 seconds to finish third.

McCarty finishes fifth at 120 pounds
Junior Landon McCarty dropped a 9-2 decision to Wilson's Jason Williams in his first match of the day, but bounced back with a 54-second pin of Scranton's Camden Labukas.

After issuing a medical forfeit to eventual champion Gavin Bradley of Athens, McCarty forged a 7-0 win over Corning's Freddie Clark to even his pool play mark at 2-2.

In the fifth-place match, McCarty scored a fall in 1:28 over Falconer's Anthony Rivera.

He dropped an 8-2 decision to Scranton's Shkeb Nadir, and then lost via fall to eventual champ Kaden Setzer of Athens, before closing out pool play with a pin of Falconer's Mason Kilmer in 3:58.

Tedesco withdraws after 2-1 start
Junior Gage Tedesco opened with a 55-second fall over Corning's Reilly Peiffer, but lost via first-period fall to Falconer's Kyle Keefe in Round 2.

After a 13-1 major decision win over SVEC's John Johnson, Tedesco withdrew due to a stomach ailment. He finished sixth in the 172-pound weight class.

Others:
•   Senior Andrew Kimble opened pool play with a win over Wilson's Andre Reyes in 1:24, but dropped his next three bouts in the 172-pound weight class.

•   Senior Austin Ingham opened with a pin of West Scranton's Jamir Chiaramonte in 5:03, but was forced to forfeit the remainder of his matches due to an injury. He finished sixth in the 132-pound weight class.

•   At 145 pounds, junior Braeden Nichols' lone win in Pool B play came via a forfeit from Wilson's Blaze Hartum, who suffered an injury. Nichols issued a forfeit to Scranton's Connor Order in the seventh-place match.

•   Also at 145 pounds, junior Mason Ham was 1-4 — received a forfeit from Wilson's Blaze Hartum in the ninth-place match.