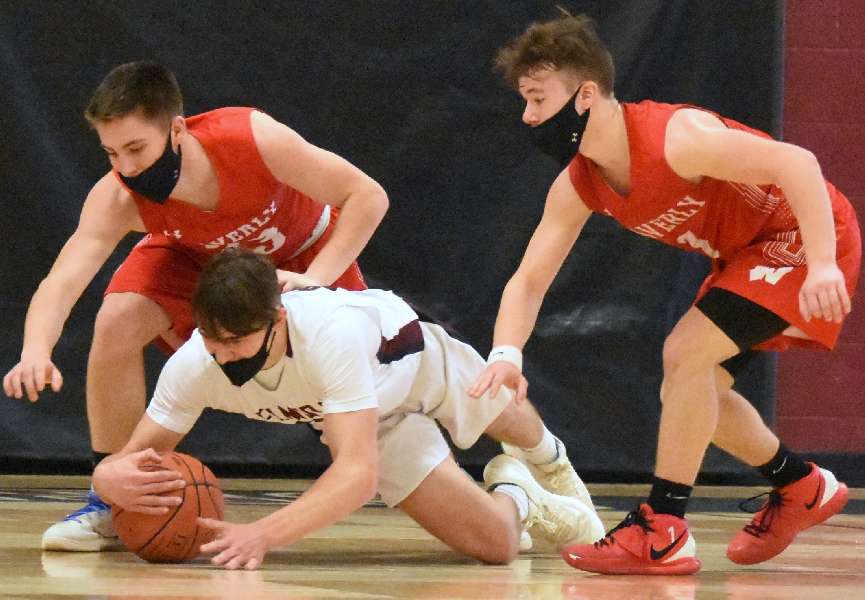 ELMIRA — Elmira raced out to an 18-point first-quarter lead, and cruised to a 69-49 win over Waverly here Saturday afternoon in non-league boys basketball action.

“The first quarter was the story of the game,” said Waverly coach Lou Judson. “I knew (Elmira) was going to come out in a full-court press and get after it from the get-go, and we just weren’t ready.

“It’s tough to simulate that type of team speed and athleticism if you don’t see it on a weekly basis, you can’t describe to your players what they’re in for.

“If you can’t get their first line of defense consistently, you’re going to struggle, and we struggled in the first quarter” noted Judson. “I thought we figured them out from there on out, but by that time they had a 20-point lead, and we don’t have enough firepower get back in the game against a team like Elmira.”

The Express converted several turnovers into easy points en route to a 26-8 lead after the first eight minutes.

Freshman Joey Tomasso scored six points in the second quarter, and junior Brennan Traub added a 3-pointer, but Horseheads outscored Waverly, 16-13, to take a 40-21 lead into the halftime locker room.

Elmira added four more points to its lead in the third quarter, and led 53-30 heading into the final eight minutes.

“After the first quarter, I was pleased with how we played,” said Judson. “We kept on fighting, we never gave up. We went on some runs in the second half that made them call a couple of timeouts.