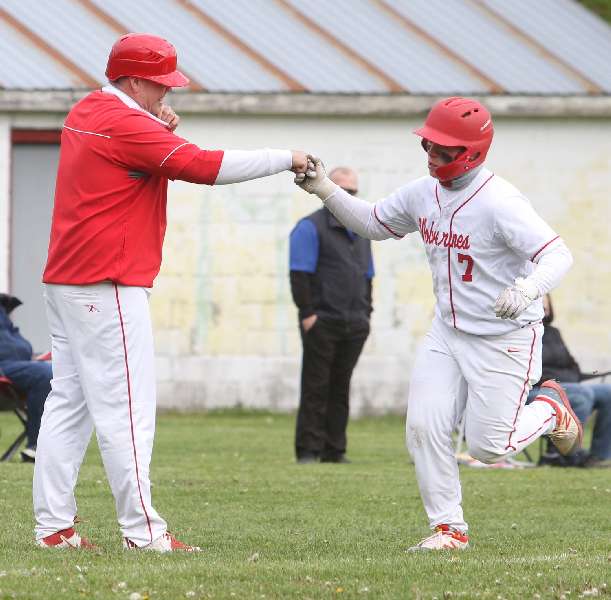 SPENCER — Waverly scored six runs in the top of the fifth inning to blow open a tie game on its way to a 14-5 win over Spencer-VanEtten / Candor here Monday afternoon in IAC Division 3 baseball action.

Sophomore Ty Beeman, who had three hits, including a home run, and five RBI, led off the fifth inning with a single, and junior Caden Hollywood followed with a double to put runners on second and third. Junior Kaden Wheeler then gave the Wolverines the lead for good, at 7-5, with a two-run single up the middle.

With two outs and the bases loaded, freshman Jay Pipher was hit by a pitch to force home a run, and freshman Joey Tomasso hit an infield RBI single to make it 9-5.

Beeman capped the rally with his second hit of the inning — a two-RBI single to make it 11-5.

The Wolverines pushed the lead to 13-5 in the sixth inning on an RBI double by Traub, who later scored on a wild pitch.

Pipher’s RBI single to score junior Thomas Hand, who led off the top of the seventh inning with a triple, provided the final margin.

Waverly opened the scoring on an RBI junior by junior Brady Blauvelt in the top of the second inning, but the Eagles answered with two runs — on a two-run double by Jayden Grube — in the home half of the frame.

Pipher led off the top of the third with a line-drive single to center field, and Tomasso was hit by a pitch. After the runners advanced on a passed ball, Beeman slammed a 1-1 pitch to center field for a three-run home run to give the Wolverines a 4-2 lead.

Kamron Smith’s RBI double in the bottom of the fifth trimmed the deficit to 4-3,

Pipher’s sacrifice fly in the top of the fourth gave Waverly a two-run lead again, at 5-3, but SVEC responded with a pair of runs — on an RBI single by Devin Beach and a bases-loaded walk to David Vega — to tie the game at 5-5.

Traub was 4-for-4 with two doubles, three runs scored, and one RBI to pace Waverly’s 17-hit attack, while Pipher singled twice, scored two runs, and had three RBI, Hollywood doubled and singled, and scored one run, and senior Nick VanHouten singled twice.

Jack Barrett earned the win for the Wolverines. He allowed one hit in two innings of scoreless relief, while striking out two. Beeman pitched a hitless seventh inning with one strikeout.

Beach led SVEC with two hits, while Grube doubled, scored one run, and drove in two runs, and Smith doubled and knocked in a run.