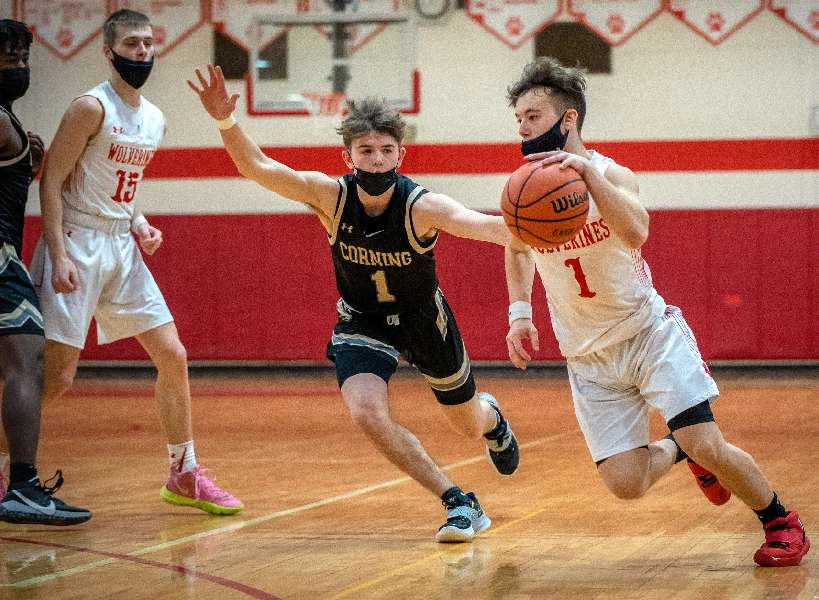 CORNING TOO MUCH FOR WAVERLY

WAVERLY — Once in a while even good programs are overmatched Such was the case here Monday night in Waverly’s 90-67 loss to Corning in non-league boys basketball action.

“(Corning) just has so many weapons at both end of the floor,” said Waverly coach Lou Judson. “Their point guard, shooting guard and small forward / guard are the best three-man combo in all of Section IV. They’re just very, very good.

“They shoot the ball from 3-point range very well, and they share the ball extremely well.

“We were over-matched tonight, what can I say?” noted Judson. “They’re a Class AA team school, and probably the best team in Section IV.

“It’s probably the second-best team I’ve coach against — the best being the Seton Catholic team that won the state championship back in the early 2000s,” he added.

Corning, which used a balanced attack throughout the game, had five players scored at lead four points in the first quarter, led by Justin Rodriguez, who had a pair of 3-pointers and eight points, and Jackson Casey, who had six points on a pair of 3-pointers, to lead the Hawks to a 30-16 lead after the first eight minutes.

Waverly also had six players put their name in the scoring column, but none of them scored more than three points.

Corning’s onslaught slowed a tad in the second quarter as Landen Burch scored eight points, Casey Rodriguez, and Aiden Proudfoot added 3-pointers (to give the Hawks eight in the first half) in a 23-16 run that extended their lead to 53-32 at the intermission.

Senior Ryan Lambert and junior Davis Croft, who each hit 3-pointers, scored five points apiece in the stanza to lead the Wolverines.

“We competed for a while. We ended up putting 67 points on the board, we just gave up 90,” said Judson.

“I was really with how we were able to compete, and my guys played hard,” added Judson. “They accepted the challenge.”

The Hawks kicked back into high gear in the third quarter, with Burch tossing in 11 points and Proudfoot adding eight to fuel a 25-11 run that extended the lead to 78-43 heading into the final eight minutes.

Both teams went to their benches in the fourth quarter. Waverly had eight different players score, with six of them scoring at least three points, in a 24-11 run that provided the final margin.

Burch led Corning with 24 points, while Casey scored 15, Proudfoot added 14, and Rodriguez chipped in with 13 points.

Waverly falls to 5-4 on the season, but all four losses are against Class AA Horseheads, Elmira, and Corning.

“I’m super-proud of my guys, we just got done playing three Class AA schools in a row.

“I see it as my team got to play some teams we would never get to play during a regular school year because they wouldn’t play us due to sectional points,” said Judson.

“Hopefully, this is going to allow us to be a better basketball teams as we move forward into these next few games against teams more our size, and for those guys returning next year.

“I would have to think we had the toughest schedule of any Class B school in the state,” added Judson. “I think this will pay dividends in the long run.”