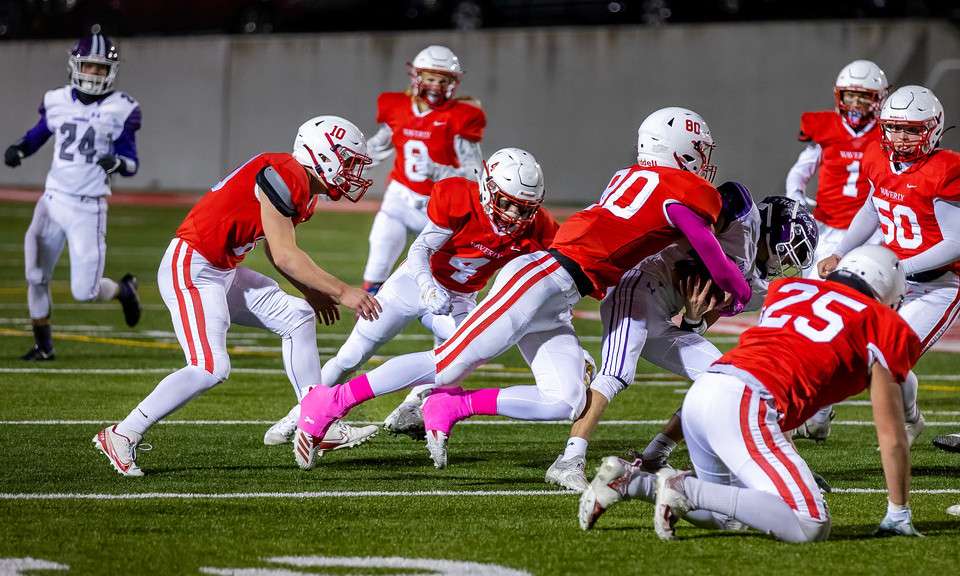 The Wolverines, ranked seventh in the state, are now 10-0. It’s a first for the program, which dates back to 1893.

It’s a big win,” said longtime Waverly coach Jason Miller. “We’re in the sectional championship game — that was our goal. It’s a big deal for this team.

“And, we’re the first 10-0 Waverly team — it’s a historic moment,” added Miller. “I’m proud of this team, they’ve worked hard, and they deserve it.”

Waverly now has a date with fourth-ranked Chenango Forks in the Class C title game next weekend.

“We’ve got a huge task ahead of us,” said Miller. “We need to get healthy, and we need to have a great week of practice.

“We need to find a way to prepare for what I think is the best team in the state,” added Miller. “Forks is a great program, and we’re excited for the opportunity.”

Norwich started the game with the ball on its own 23. After a first down, Waverly’s Tyler Talada knocked down a third-down pass to force the Purple Tornado into punt formation. A low snap, and a hard-rushing Kayleb Behcy forced the punter to take off, and junior Ty Beeman made the stop short of the first down.

The Wolverines took possession at the Norwich 36. After a quick 8-yard completion to Talada, Tomasso followed junior tailback Gage Tedesco through the line, bobbed-and-weaved through traffic, cut to the outside and raced 28 yards for a TD with 8:08 remaining in the first quarter.

Norwich used its power running game to move the ball to the Waverly 33 on its next possession, but on 4th-and-3, a blitzing Conner Stotler nearly stole the hand-off in the Norwich backfield, forcing a fumble that Beeman pounced on at the 37.

The Wolverines quickly moved the ball into the Norwich red zone, thanks in large part to a 29-yard run by Tomasso. On first-and-5 at the Norwich 14, senior Brady Blauvelt ran an out-and-up on the home sidelines, and Tomasso, whose pump fake bought Blauvelt a step, dropped a ball into Blauvelt’s waiting hands in the end zone for a 14-yard TD. Clark’s PAT made it 14-0 with 2:00 left in the opening stanza.

The Wolverine defense forced a three-and-out on Norwich’s ensuing possession, and Waverly took over at its 36.

After a pass interference call against Norwich moved the ball to the Purple Lion 49, Tomasso ripped off an 18-yard run, Tedesco followed with a 21-yard bolt up the middle, and Tomasso capped the three-play scoring drive with a 10-yard TD run with 10:55 remaining in the first half. Clark’s PAT kick made it 21-0.

“We really played well at the beginning of the game,” said Miller. “We executed well on offense, and we executed on defense.

“(Norwich) is a physical team, but I thought we matched their intensity and physicality, and executed very well,” he noted. “We didn’t make a lot of mistakes in any facet of the game.”

Tomasso ran the ball just four times for 85 yards and two TDs in the first half.

“He’s very patient, and he has that little burst,” said Miller on Tomasso’s running style. “He’s not lightning fast or lightning quick, but he finds places to get through.

“I would like to see him get going, instead of dancing like that, but he always seems to find extra yardage,” he added.

Norwich answered with a 16-play, 80-yard drive that chewed up just six seconds shy of 8 1/2 minutes off the game clock, overcoming a 14-yard holding penalty, and a 13-yard loss on a high snap to cut the deficit to 21-8 (after Evan Sylstra’s run for conversion) with 2:21 remaining in the first half. QB Torin Lawrence capped the lengthy drive with a 1-yard run on fourth-and-goal.

Junior Nate DeLill returned the ensuing kickoff about 15 yards to the Norwich 49, but Waverly turned the ball over on downs four plays later at the 42.

On Norwich’s first play, Waverly’s Isaiah Bretz out jumped the Purple Tornado receiver and came down with an interception at the Norwich 48 with 39 seconds remaining in the first half.

After a 13-yard pass from Tomasso to Blauvelt moved the ball to the 35, Waverly faced a third-and-8 at the 33, but Tomasso found Bretz open behind the Norwich secondary for a 33-yard TD strike with 5 seconds left in the first half. Clark’s PAT kick made it 28-8.

Tomasso completed 7 of 11 passes for 88 yards and two TDs in the first half.

“We were able to throw the ball in the flats, and throw the ball down field, and that gets the defense back on its heels a little bit,” said Miller. “I thought our receivers played well, and I thought Joe (Tomasso) looked sharp, that’s as well as he’s played all year.”

The Wolverines received the second-half kick, and marched 58 yards on seven plays to extend its lead to 35-8 with 9:12 remaining in the first quarter.

Tomasso was 4-for-4 on the drive, completing a pair of 9-yard passes to sophomore Jay Pipher, and passes of 5 and 27 yards to Blauvelt to give the Wolverines a first-and-goal at the Norwich 5.

Two plays later, Tedesco carried a pair of Norwich tacklers into the end zone for a 4-yard TD run.

Waverly stopped Norwich’s ensuing possession on downs at the Wolverine 10, then drove it back to the Norwich 32 before turning it back over on downs with 8:35 left in the game.

Norwich ran for 180 yards on 42 carries, with Malachi Gaters running for 55 yards on 11 carries,  Lawrence carrying the ball eight times for 53 yards and one TD, and Sylstra adding 46 yards on 14 carries.

Lawrence completed 3 of 6 passes for 27 yards, and back-up QB Trent Wessels was 1-for-1 for minus-2 yards through the air.

Waverly’s defensive efforts were all the more remarkable considering the absence of starting linebackers Cayden Turcsik, D.J. Shaw, and Tedesco, who did not play a snap on defense.

Ty Beeman, who normally starts at defensive tackle, and Stotler were inserted at linebacker, with 8th-grader Troy Beeman and freshman Cam Hills playing on the defensive line in a committee with Jacob Benjamin.

“We moved Ty (Beeman) and Conner Stotler into the linebacker spots. I’m really proud of both of them.

“Ty is a better defensive lineman, but he plays with a lot of passion, and is a good tackler because of his wrestling skills,” said Miller. “And Conner, all 135 pounds of him,  did a great job, and made some big plays.

After the win, Ty Beeman said the Wolverines are all about “heart.”

“I’m at a loss for words to be honest. We have a bunch of tough kids out here,” he said. “It’s heart. We have a lot of heart on this team, and that’s what’s carried us this far.”

“On offense, we started an 8th-grader (Troy Beeman) and a 9th-grader (Cam Hills) at guards — that’s just unheard of, and they did a great job.”