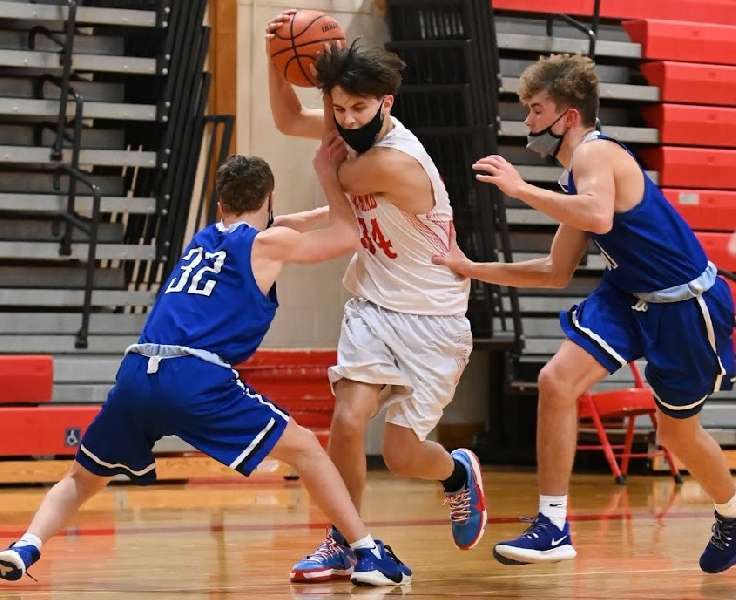 WAVERLY — Horseheads scored 17 straight points in the third quarter to blow open a close game on its way to a 65-49 win over Waverly here Friday evening in non-league boys basketball action.

“I was very disappointed tonight in our play. It was one of those nights that you can’t explain as a head coach,” said Waverly coach Lou Judson. “We just didn’t come ready to play. Maybe it was because of their defense, which took us out of everything we wanted to do on both ends of the floor.

“We’re just going to have to move on. We have a game tomorrow, so we don’t have the time to get in the gym to practice and go over things.

“Hopefully, these guys got the message after this game that tonight was not good enough,” added Judson. “It wouldn’t be good enough in any give year, but for sure tonight’s effort and performance for this program is not acceptable.”

Judson attributed his team’s struggles to the Blue Raiders’ physical play and defense.

“(Horseheads) definitely dictated the way the game was going to be played by their physicality,” said Judson. “They were so much stronger than we were.

“They pushed our offense really high, and it made us do things we’re not comfortable doing,” he noted. “Their half-court defense was very solid.

“We missed a lot of shots around the rim. I think a lot of it was because of our size — we don’t have much of it. I think we were trying to do some things creatively around the rim that we’re not capable of doing,” added Judson. “You can’t beat a Horseheads team when you’re 6-for-27 from 3-point range when you’re a 3-point shooting team.”

Horseheads jumped out to a 10-3 lead with 3:37 remaining in the first quarter, but junior Brady Blauvelt drained a 3-pointer, and scored on a putback on the offensive glass to trim the deficit to 10-8 with 2:26 left in the opening stanza.

Less than a minute later, senior Kobe Decker converted an old-fashioned three-point play to cut the lead to 12-11.

After a bucket by Alex Daugherty put Horseheads up 14-11, freshman Joey Tomasso made one free throw, and Decker scored from close range in the final minute to send the game into the second quarter at 14-14.

Andrew McLaughlin drained a 3-pointer and scored in transition to fuel a 7-2 Horseheads spurt early in the second quarter, but Waverly junior Davis Croft answered with a long jumper, and a 3-pointer to tie the game at 21-21 with 6:10 remaining in the first half.

McLaughlin and Amari Truax combined to score the next six points to give Horseheads a 27-21 lead with 2:48 remaining, but a 3-pointer by junior Liam Traub and a free throw by Croft closed the game to 27-25 at the half.

McLaughlin and Croft exchanged buckets to leave Horseheads ahead 29-27 with 7:13 remaining in
the third quarter, but the Wolverines did not score again for nearly seven minutes.

McLaughlin and Truax scored seven points apiece in the 17-0 run that put Horseheads ahead 46-27 with 44 seconds remaining in the third quarter.

The Wolverines drought ended 18 seconds later when Thomas Hand came up with an offensive rebound, and found Decker open for a short jumper to make it 46-29.