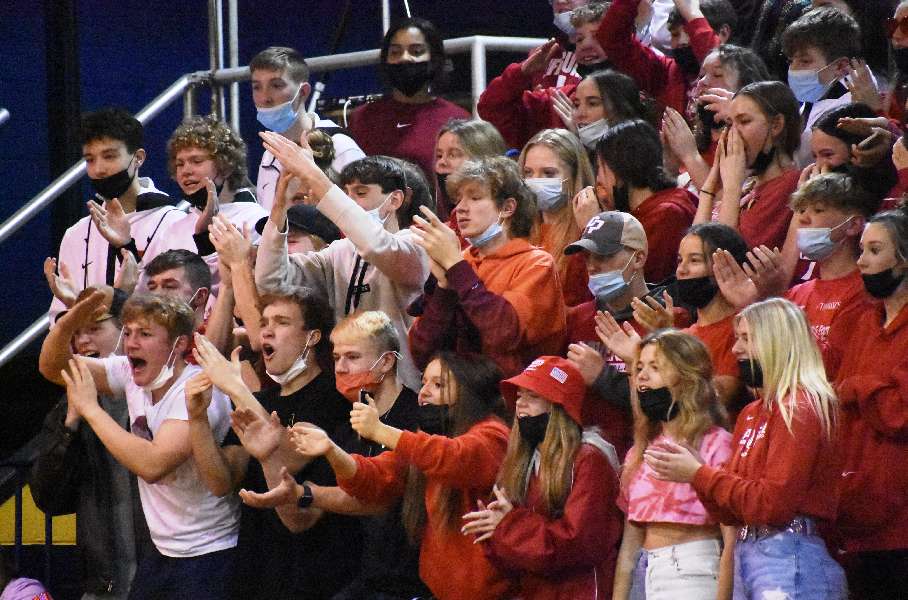 SOUTHPORT —The fans were going crazy.

Down 14-0 to start the game, Notre Dame was starting to fight their way back.

As the clock ticked to zero to end the first half Waverly's Joey Tomasso took a pass just inside of half court and launched a long range shot that found nothing but net.

Just like that the Wolverines lead went from seven back to double figures, and Waverly never looked back, winning 69-30 over the Crusaders in an IAC matchup.

"My guy gave me a really good pass at half court and there was only one second so I might as well shoot it and it went in and it was big," Tomasso said.

All game long the Wolverines were shooting the ball well, hitting eight threes in the win.

A year ago games were played in front of empty gyms. On Friday it felt like a playoff atmosphere as fans from both sides were going crazy all game long.

"They have always been a big rivalry for us, and it's always fun coming up here and playing them. Today was a fun day for Waverly, we got a good win out of it."

Waverly coach Lou Judson knows just how tough it is to play at Notre Dame.

"It was a big performance for us, and that's not an easy place to play," Judson said. "(Notre Dame) is a good basketball team, we just took them out of the things they wanted to do."

The game couldn't have started better for Waverly as they quickly jumped out to a 14-0 lead.

It was Cam Johnson who got things going for the Crusaders, scoring six straight points at one point for Notre Dame as they cut into the deficit.

Notre Dame got the game within eight, but Tomasso hit a three to push the lead back to 11.

But, back-to-back baskets by Eric Bukowinski and then Steven Gough cut the deficit to seven with just seconds left in the opening quarter. That's when Tomasso went to work and hit the three at the buzzer.

Tomasso had 10 points in the opening quarter and he added six more in the second quarter as Waverly outscored the Crusaders to extend the lead to 38-19 at the half.

It was the third quarter where Waverly really pulled away, outscoring the Crusaders 21-5 to extend the lead to 59-24.

The Wolverines held Notre Dame to 11 points in the second half.

"I was very pleased with our defense," Judson said. "And, the shots fell for us, it was a good game all the way around."

Tomasso led Waverly with 26 points and Brennan Traub had 15, while Brady Blauvelt had 13. Tomasso and Traub each hit three threes.

Nate DeLill had six points and Davis Croft had five, while Jacob Benjamin and Isaiah Bretz had two points each.

Tomasso had three assists and three rebounds and Croft had four boards and two steals.

Delill had four rebounds and two steals and Blauvelt had nine boards, while Traub had five rebounds.

Gough and Bukowinski each led Notre Dame with 11 points and Johnson had six, while Malik Owens finished with two points.

Coming off a loss to Watkins Glen in their last game, the Wolverines were happy with the effort on Friday.

"We played very well tonight," Judson said. "I was really proud of the guys for responding to our performance against Watkins Glen. The guys came out with something to prove tonight."

For the players they weren't happy with the way they played against the Senecas and wanted to bounce back.

"We were a little mad after that one," Tomasso said. "So, it's nice to come out here and get a big win over Notre Dame in the IAC and hopefully we can get Watkins Glen next time."