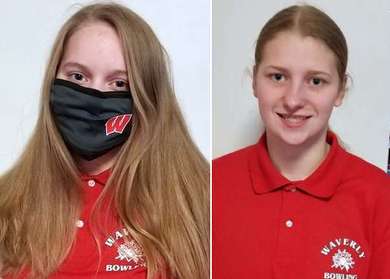 WAVERLY — Waverly had three finishers in the top five, including a 1-2 finish by freshman Rachel Houseknecht and sophomore Victoria Houseknecht, and all six of its bowlers finished in the top 16 in winning the team title at the virtual IAC girls bowling championships.

Rachel Houseknecht won IAC gold with a 571 series, which included games of 203 and 206.

Victoria Houseknecht and SVEC’s Mya Marsh both rolled 538 series, but Houseknecht won the silver medal by virtue of a 205 high game, as opposed to Marsh’s 201.

Sophomore Shantilly Decker placed fifth with a 486 series, and senior Haley Kittle was 14th with a 419.

Junior Sage Garrison and 8th-grader Serenity Clark each rolled 406 series, but Garrison finished 16th  by virtue of a 171 high game, and Clark was 17th with a 164 high game.