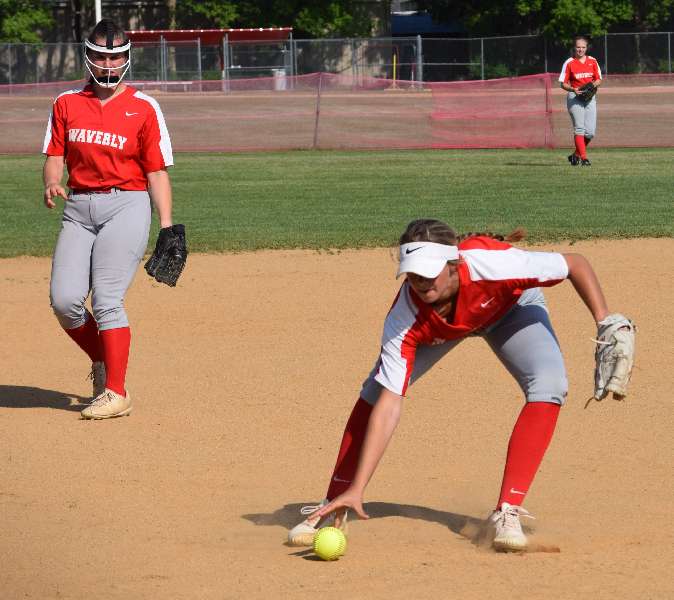 WAVERLY — Lansing jumped out to a 5-0 lead, then held off Waverly’s comeback efforts for an 8-5 win here Tuesday afternoon in IAC softball action.

The Lady Bobcats scored one run in the top of the second, and two more in each of the second and third innings to build the 5-0 lead.

In the home half of the fourth inning, junior Aubrey Ennis blasted a two-out three-run home run over the left field fence to trim the deficit to 5-3.

Lansing kept scoring, however, tacking on two runs in the fifth and one more in the sixth to push its lead back to five runs, at 8-3.

In the bottom of the sixth inning, Waverly plated two runs on consecutive two-out doubles by Ennis, senior Alyssa Sindoni, and senior Hali Jenner to cut the lead to 8-5.

With one out in the bottom of the seventh, Jadyn Babcock walked, and freshman Peyton Shaw and senior Sidney Tomasso stroked back-to-back singles to load the bases.

Freshman Olivia Robinson then ripped a line shot, but Lansing shortstop Kiara Lovejoy snared it, and turned it into a game-ending double play.

The Lady Wolverines outhit Lansing 11-5, but left 12 runners on base.

Ennis homered, doubled, and singled, scored two runs, and had three RBI, and Shaw stroked three singles and scored one run to pace Waverly at the plate.

Jenner was tagged with the loss, allowing eight runs — six earned — on five hits in seven innings. She fanned 12 and walked seven.