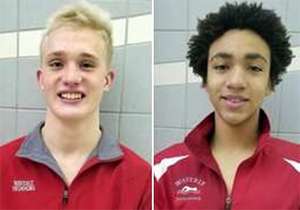 The Wolverines led 71-66 after nine events, but the Bobcats swept the top three spots in the 100-yard backstroke to take a 79-74 lead with two events remaining.

Senior Kaden Wheeler won the 100-yard breaststroke — one of his four wins— in a time of 1:08.51, and freshman Jason Marrone was third in 1:27.25, but Lansing swimmers finished second, fourth, and fifth, respectively to maintain an 87-83 advantage.

The Wolverines split their top swimmers in the 400-yard freestyle relay in an effort to finish, at worst, first and third for the win, but Lansing’s foursome won the meet-closing event by more than 20 seconds to clinch the victory.

Wheeler, and junior Jerrell Sackett were both quad-winners to lead Waverly, while junior Oscar Williams was a triple-winner, and sophomore Liam Wright notched one win.

Wheeler, who won the aforementioned butterfly, also won the 100-yard butterfly in a time of 55.56 seconds.