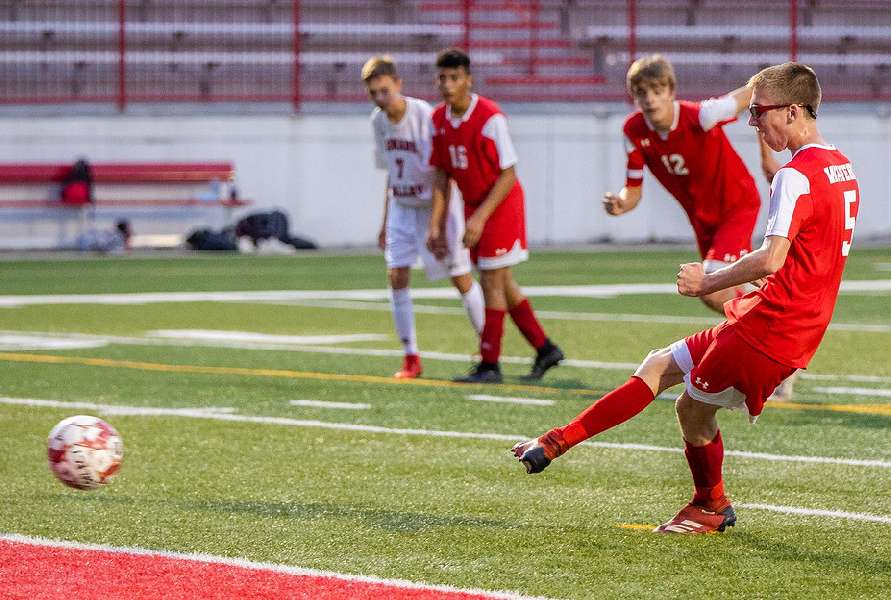 “It’s always good to bring home a win, but it wasn’t without incident,” said Waverly coach Eric Ryck.  “Newark Valley scored quickly on us in each half. Catching us on our heels and not being aggressive enough, they were able to get the ball through and finish with a couple nice shots.

“Luckily, we were able to counter those goals each time, and add a couple more insurance goals, too” noted Ryck.

“I’m really happy with how we were moving the ball, and also with the boys’ movement off the ball,” he added. “They were working together really well, and creating great opportunities, just playing really good soccer. They are really starting to gel as a team.  It’s fun to watch.”

Brady Hill scored 90 seconds into the game to give the Cardinals a 1-0 lead.

Larrabee’s first goal was on a penalty kick to tie the game at 1-1.

The Wolverines added three more goals in the first 45 minutes and led 4-1 at the half.

Newark Valley struck quickly again in the second half, scoring just 30 seconds after the intermission to trim the deficit to 4-2, but Waverly added a pair of insurance goals.

Larrabee also had one assist, to go along with his three goals, while Griff Schillmoeller scored one goal and doled out one assist, and Alex Emanuel and Austin Ingham each tallied one goal.