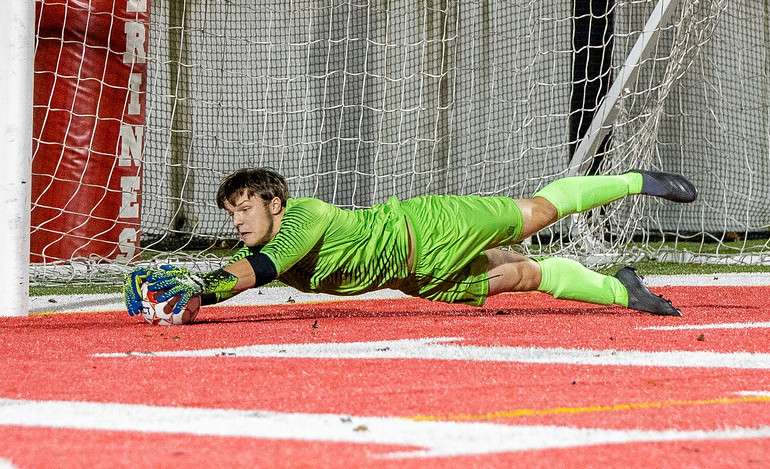 The win is the third straight over the Crusaders after not beating them for a decade.

“Notre Dame always plays us tough,” said Waverly coach Eric Ryck. “It’s a bit of a rivalry game, so they are always dangerous when we play. To that end it was good to come away with a win.

“The boys played great tonight, their communication, movement off the ball, and their passing was all on-point,” noted Ryck.

“Our combination play is something we’ve been struggling with, and we put some work in on it Wednesday, so it was good to see some of that work coming through in their play tonight,” added Ryck. “I hope it’s something we can continue to build on and keep getting better throughout the rest of the season.”

After 36-plus scoreless minutes of action, sophomore Nehemiah Anthony, off a feed from Larrabee, put the Wolverines on the board. They carried the 1-0 lead into the halftime locker room.

Sophomore Carter George, off an assist from Larrabee, scored two minutes after the intermission to extend the lead to 2-0.

Senior Brennan Traub, off Larrabee’s third assist, scored in the 64th minute to give Waverly a 3-0 lead.

With just 8 minutes remaining in the game, sophomore Jon Searles, off an assist from Traub, capped the scoring.

Senior Cameron McIsaac recorded four saves in net for Waverly, while Jackson Potter had 10 for the Crusaders.