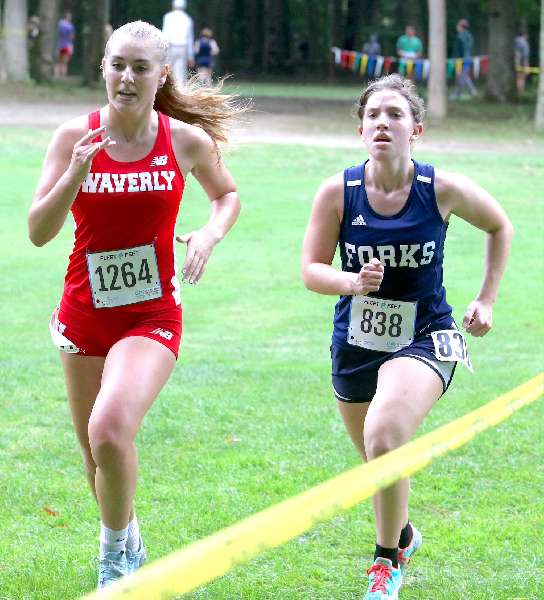 There were five boys races, and five girls races. In all, there were 83 boys teams, including 66 complete teams, competing, and 78 girls teams, with 47 complete teams. There 675 boys in the merged field, and 463 girls.

Powerhouse Fayetteville-Manlius had seven runners in the top 10 to run away with the team title with 19 placement points, well ahead of runner-up Lake Placid, which had 71 points, and third-place finisher Chenango Forks, which had 102 points. Tioga finished eighth with 243 points, while Waverly and Athens did not field a complete team.

"Today was another great day of racing for the Athens kid," said Athens coach Scott Riley. "On the team side of things, we were a little short-handed and didn’t have all our girls available to race.
"But, the four we had racing did a great job, Sara and Emma Bronson were up front from the beginning and ran smart throughout the race," noted Riley. "Thea Bentley and Cailyn Conklin ran good races and continue to get stronger."
Sara Bronson clocked in at 21:37.5 to finish 11th, and Emma Bronson was 12th in 21:42.8 to lead the Lady Wildcats, while sophomore Thea Bentley was 40th in 26:16.6, and sophomore Caillyn Conklin was 62nd in 29:00.9.

MERGED RESULTS
ATHENS
Sara Burrowes finished 70th in the merged field, while Emma Bronson was 73rd, Bentley was 302nd, and Conklin was 383rd.

WAVERLY
Minaker finished 106th in the merged field, while Vaughn was 205th, Nittinger was 241st, and Barrett was 407th.

TIOGA
Tioga finished 47th in the merged standings with 1,467 points. (Fayetteville-Manlius won the team title with 51 points, and Corning was second with 147 points.