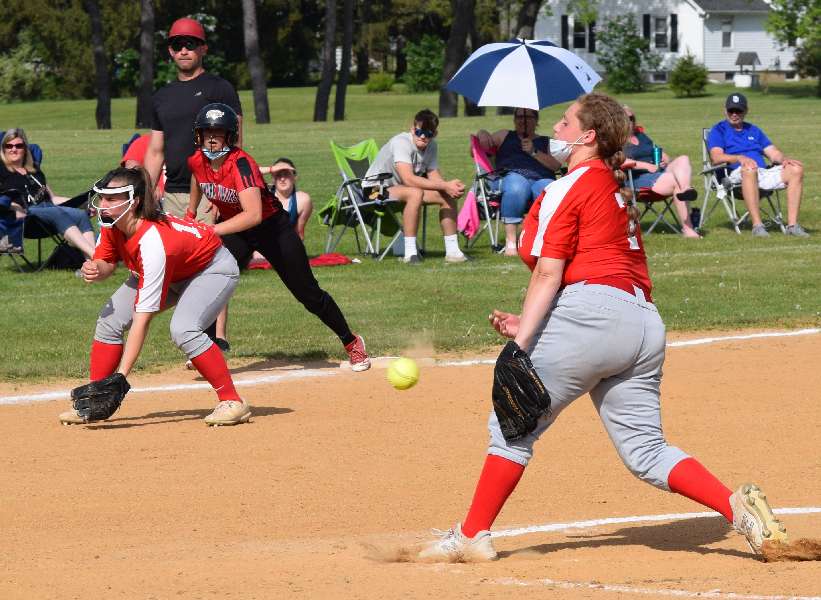 WAVERLY — Junior Aubrey Ennis hit a two-out grand slam in the bottom of the seventh inning to cap Waverly’s rally from a 5-0 deficit, but Newark Valley scored a run in the top of the eighth on a dropped third strike to pull out a 6-5 win here Wednesday afternoon in IAC South Large School Division softball action.

Newark Valley took a quick 1-0 lead in the first inning on a single, error, and two walks. Waverly starter senior Hali Jenner struck out the next batter, but was removed from the circle with an apparent injury.

Freshman Olivia Robinson relieved and pitched out of the jam with a strikeout, and a groundball to first baseman freshman Peyton Shaw.

Newark Valley starter Ari Westbrook retired Waverly in order in the first inning, then pitched around a single, a double, and an error in the second inning to preserve the 1-0 lead.

The Lady Cardinals added an unearned run in the fourth inning to take a 2-0, then scored runs in the fifth, sixth, and seventh innings to up their advantage to 5-0.

In the bottom of the seventh, sophomore Michaela Lauper led off with a single, and took third base on a one-out single by junior Jadyn Babcock.

An infield error allowed senior Sidney Tomasso to reach, and loaded the bases, then Jenner walked to force home a run.

With two outs, Ennis launched an 0-1 pitch over the center-field fence to tie the game.

In the top of the eighth inning, Hayley Beebe singled with two outs. Tomasso relieved Robinson in the pitcher’s circle, and with Beebe on third base — Beebe took second and third on defensive indifference — struck out the first batter she faced, but the third strike skipped past the catcher allowing the run to score.

In the home half of the inning, Lauper walked with one out, and Shaw reached base on an error. After a sacrifice bunt by Benjamin moved the runners up, Westbrook recorded the final out to preserve the win.

Ennis had three hits, including a home run, scored one run, and drove in four runs to pace Wavelry’s seven-hit attack, while Tomasso, Lauper, and Babcock each singled and scored one run, Sindoni doubled, and Jenner scored one run.

Jenner allowed an unearned run one hit and walks, with one strikeout in 1/3 of an inning.

Robinson was tagged with the tough-luck loss. She allowed five runs — three earned — on seven hits, while striking out 10 and walking two in 7 1/3 innings. Tomasso had one strikeout in 1/3 of an inning.

Westbrook earned the win for NV, allowing five runs — all unearned — on seven hits, while striking out five and walking four in eight innings in the circle.

Waverly, now 6-6, returns to action Friday at Thomas A. Edison.