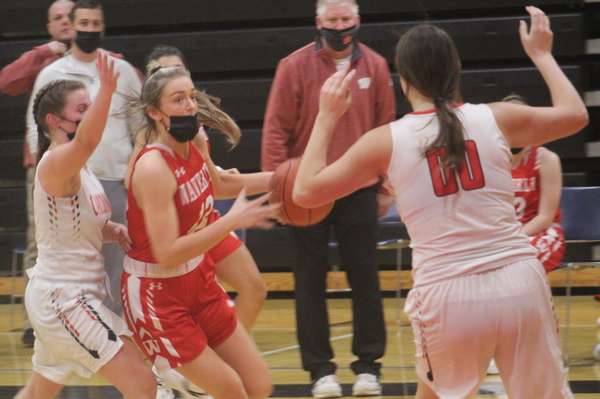 The Lady Wolverines seemed poised early to reverse that trend here Wednesday night, but the Lady Cardinals rallied to take a halftime lead, pulled away in the third quarter, then held off a late rally for a 75-70 win in IAC girls basketball action.

“We knew it was going to be a battle,” said Waverly coach Bob Kelly. ”We certainly showed up with some effort.

(Newark Valley) is awfully tough underneath the basket, with what they do,” noted Kelly. “They shoot the ball well, they cut to the basketball well … they do a lot of good things.”

Newark Valley coach Greg Schweiger was pleased with his team’s performance in a tight game.

“It was really nice to get out and have a really competitive game again,” said Schweiger. “Once we got comfortable playing our game in transition, things started to open for us.”

Sophomore Kennedy Westbrook and senior Gabby Picco each knocked down 3-pointers to give the Lady Wolverines the early lead, and senior Tomasso, who had seven points in the opening stanza, canned a 3-pointer late to give Waverly a 17-15 lead after the opening eight minutes.

Junior Lourden Benjamin drained a 3-pointer, and Westbrook converted an old-fashioned three-point play as Waverly opened the second quarter with a 6-0 spurt to take a 23-15 lead.

That was the biggest lead the Lady Wolverines would enjoy as the Lady Cardinals, used a 9-2 run —fueled by 3-pointers from sophomore Haley Beebe and senior Brianna Beebe, to close the gap to 31-30 with less than a minute remaining in the half.

In the third quarter, junior Hannah Ferguson had six points, while Brianna Beebe and Hayley Beebe, who both canned 3-pointers, scored five points apiece, and Mackenna Nechwedowich added four points to fuel a 23-14 run that put the Lady Cardinals up 56-45 entering the final eight minutes.

Newark Valley stretched its lead to 14 points in the fourth quarter, but Waverly made a late run — trimming the deficit to five points with 1:05 remaining. Tomasso, with nine points in the final stanza, and Westbrook, who added seven, did the majority of the damage for the Lady Wolverines.

Westbrook led Waverly with 21 points, while Tomasso scored 20, Benjamin added a career-high 13 points, and Picco chipped in 12 on four 3-pointers.

“I liked our energy,” said Kelly. “I know we’re going to have it again (Thursday).”