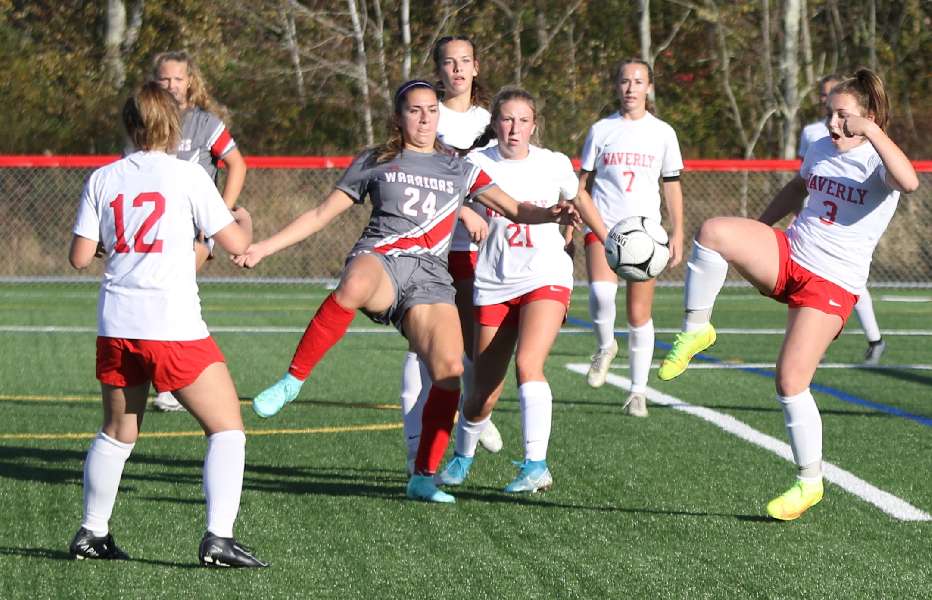 BINGHAMTON — Aubrey Marroquinn scored four goals to lead Chenango Valley to a 5-0 win over Waverly in a battle of state-ranked teams here Wednesday in the semifinals of the Section IV, Class B girls soccer playoffs.

The Lady Warriors are ranked second in the state, and Waverly coach Tara Hogan, whose team is ranked 25th, said that may have played a part in her team’s performance.

“I think there was a little level of intimidation,” said Hogan. “We knew the caliber of team they are.

“We were in the game, but we reverted back to our old, bad habits — not passing, not showing to each other, running away as opposed to coming to (the ball), and things like that.

“Overall, considering the type of team (Chenango Valley) is, I’m happy,” added Hogan. “It’s not the outcome we wanted, but the girls played hard.”

After nearly 22 minutes of scoreless action, Skylar Schaefer played a ball over the Waverly defense to a wide-open Marroquinn, who rolled a shot inside the post to give CV a 1-0 lead with 18:06 remaining in the first half.

Nearly three minutes later, Marroquinn lofted a shot from the just inside the top of 18 that snuck between the keeper’s hands and the bottom of the cross bar to make it 2-0.

“I think the first goal was a complete fluke … they had two girls who were clearly offside,” said Hogan.

“I think that completely shifted (the momentum), then the next goal took the wind right out of us,” she added.

Marroquinn completed her hat trick with 9 minutes remaining in the first half to give CV a 3-0 lead it would carry into the halftime locker room.

Madelyn Hayes scored with 28 minutes remaining in the game to make it 4-0, and Marroquinn netted an unassisted goal to complete the scoring with 14 minutes left.

Senior Bella Romano said her team had nothing to be ashamed about.

“(Chenango Valley) is ranked No. 2 in the state, they’re good,” she said. “I think we played pretty well. There were some mistakes made, but that happens every game.

“I couldn’t be prouder of how we played, especially in the second half; it was 10 times better than the first half,” she added. “I think this team showed a lot of heart.”

The Lady Wolverines wrap up the season with a 10-3-3 record.

“With the numbers we had at the end of the (spring) season, I didn’t know what to expect this year,” said Hogan.

“Then, we started this season with 22 or 23, which was surprising, but had a number of sickness and injuries that weren’t even related to soccer,” she noted. “We lost one girl to a broken collar bone, that was our only soccer-related injury.

“I’m grateful for all the kids that did come out because if we hadn’t started with those numbers, we wouldn’t be here,” Hogan added.

Both Romano and Hogan were pleased with the season.

“I’m the only senior, and there are a few juniors, the rest of the team is freshmen and sophomores, and an 8th-grader.

“Our young players really stepped up, and showed a lot of heart,” added Romano. “With such a young team, to go out and win as many games as we did, it was great.”

“The officials told the girls before the game, ‘you’re playing in a game that many, many other teams tried to get to,’ and I couldn’t agree with them more.

“We’re here for a reason,” added Hogan. “It wasn’t by chance or through luck, we worked hard. I’m 100-percent proud of them for that.”