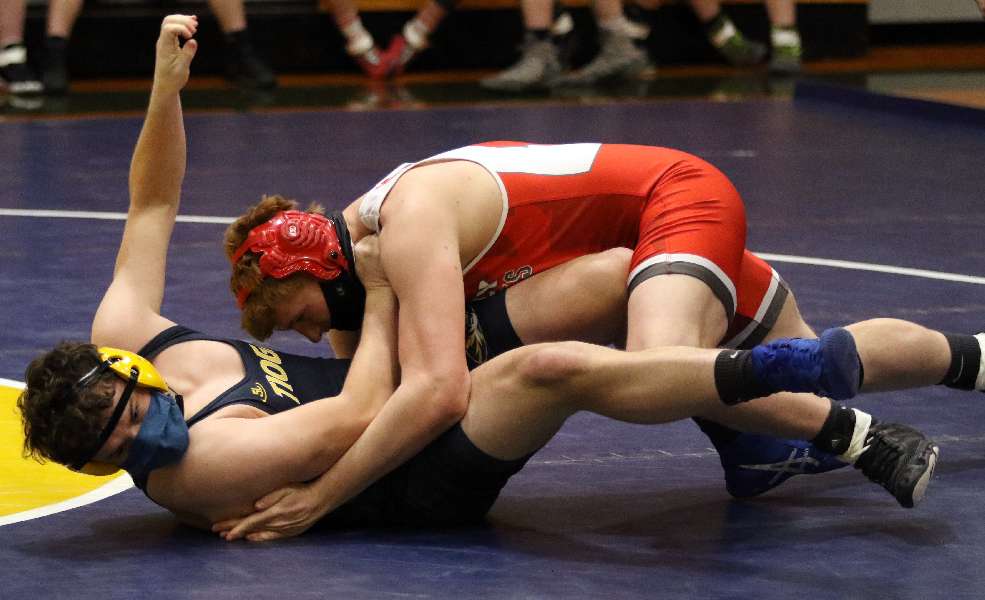 TIOGA CENTER — Tioga won six of the seven contested weight classes, including five by fall, and picked up five forfeits in a 63-9 win over Waverly here in the opening IAC wrestling match of the season for both teams.

“I thought for our first match it went really well,” said Tioga coach Kris Harrington. “Our guys did a nice job.

“There’s an adjustment wrestling with the mask, and I think we’ll see that this week,” he added. “I think once we get into next week, and the following week everyone will feel better about it.”

Waverly coach Devan Witman said he knew what his team was up against in Tioga, the two-time defending state champions, and four-time defending Section IV champs.

“I have to give my guys credit,” he said. “We weren’t scared of this state championship team, the guys went after it.

“We got our butts kicked, there’s no doubt about it,” noted Witman. “Our first match in about a year against New York State champions, I couldn’t ask for much more than the heart our guys showed out there.”

Witman said he saw a number of things he likes.

“We came in here looking at one match at a time,” he said. “We weren’t looking at a team, we were looking at individuals. I saw some really good things from my guys.

“Unfortunately, this is what to expect when you’re only two weeks into the season,” noted Witman. “We weren’t finishing shots, we weren’t getting the checks on top when we needed.

“That said, I saw a lot of good things happening,” added Witman. “Kids who have been off the mats for 12 months now have picked it up in two week’s time.”

After freshman 102-pound freshman Deakon Bailey received a forfeit to start the match off, freshman Levi Bellis gave the Tigers a 12-0 lead with a 30-second fall over Waverly 8th-grader Derek Thorp.

At 118 pounds, returning state champion Gianni Silvestri built a 12-1 lead before pinning Waverly sophomore Landon McCarty in 3:43 to make it 18-0.

“Landon (McCarty) wrestled Gianni (Silvestri), a state champion, and made it to the second period,” said Witman. “He did some things, got in on a couple shots … I saw some good things from him.”

After freshman Tyler Roe received a forfeit at 126, returning state place-finisher freshman Caden Bellis led 5-0 when he finished off Waverly sophomore Connor Stotler for a fall in 1:58 to push the lead to 30-0.

Junior Mason Welch, a returning state place-finisher, kept it rolling for the Tigers with a 43-second fall over Waverly junior Derek Bartlett.

Freshman Trent Browne earned his first varsity win with a pin of Waverly junior Andrew Kimble in 1:49 to make it 60-0 after the 172-pound bout.

At 189 pounds, in the “marquee” match of the night, Tioga junior Emmett Wood, who placed seventh at States last year, grinded out a hard-fought, 6-0, decision over Waverly sophomore Gage Tedesco.

The 189-pound bout caught the attention of both coaches.

“Gage (Tedesco) wrestled a tough match against (Emmett) Wood,” said Witman. “If we were to get that one again, I think it would be close again. I think that’s one that could go either way.”

“Emmett (Wood) going up to 189 and beating a tough kid (Gage Tedesco) was good to see,” said Harrington. “Obviously I’d like to see Emmett a little bit more on his legs, especially in the third period, but it was a good job.”

Waverly senior Trevor Meyers put the Wolverines on the scoreboard at 215 pounds with an 8-4 decision of Tioga junior Josh Snell.

There were also a number of “extra” matches wrestled. (See a full list of results below).