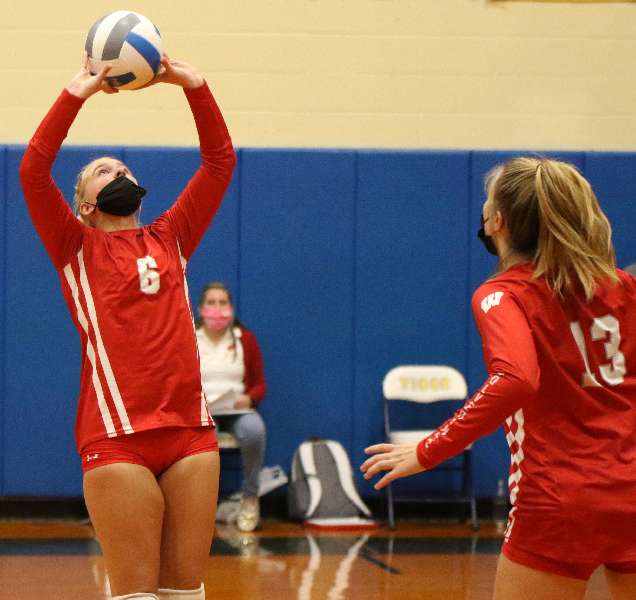 TIOGA CENTER — Tioga got off to a fast start and cruised to a sweep of Waverly here Monday evening in IAC volleyball action.

“I was very pleased with our performance,” said longtime Tioga coach Des Ford. “ “We’re working to be more consistent, but our service was pretty good tonight, and we hit the ball well, too.

“We’ve also been working on our defense, and trying to get to ball,” she noted. “We’re not there yet, but tonight was better.

“This is the end of the season, we have to keep improving and advancing,” added Ford.

“I think we could have been in the match if we would have hit the ball, and not over-passed because that’s when they’re just going to tee off on you.

“The girls are either on or off, and we definitely weren’t on tonight,” added Meyers. “(But) Tioga is always tough. You know what you’re going to face when you come in here.”

Junior Hailey Browne started Tioga with a four-point service run in the first game to put them ahead 5-2.

Senior Molly Bombard then served up nine points in a row to push the lead to 14-4. Moments later, senior Austyn Vance served six consecutive points to make it 22-6 on the way to a 25-10 win.

In the second set, the teams traded side-outs until Tioga junior Courtney Doyle-Benjamin had a five-point service run to put the Lady Tigers up 9-5.

Senior Julia Bellis opened the game with six straight service points in a run that featured a pair of kills by senior Mariah Nichols.

Shaw had two points and four kills for the Lady Wolverines, while senior Sydney Nierstedt had four digs, and freshman Lillie Kirk chipped in with three digs.