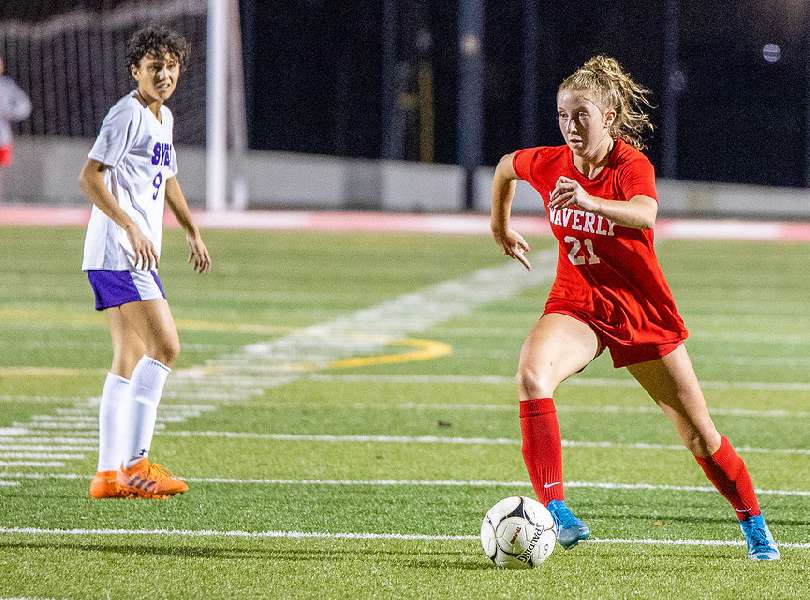 Early in the day, Waverly coach Tara Hogan agreed to play SVEC, which is sorting through low-number issues, with both teams fielding just 10 players. Later in the day, she saw a forecast for potential bad storms tonight.

“I found that we played even better with our space, considering we had to work with one less player,” said Hogan.

“And, with the potential of bad storms coming, I told the girls we needed to have a quick start,” she noted. “We wanted to at least have a good result by halftime in case we needed to call the game.

“The weather worked out just fine, but the girls really put in the work to get a solid result by halftime,” she added.

Hogan said it was one of her team’s better outings of the season.

“We had a few times where we were too excited and found ourselves rushing a bit, but otherwise I am very happy with the quick start and finishing,” said Hogan.

VanAllen netted a hat trick in the first 15 minutes of the game, scoring the goals at five-minute intervals.

VanAllen made it 1-0 five minutes into the game off an assist from sophomore Kiley Stillman, then five minutes later made it 2-0 off a feed from 8th-grader Claire Clonch.

With 25 minutes remaining, VanAllen, off a feed from freshman Addison Westbrook, finished off her hat trick to give the Lady Wolverines a three-goal lead.

About 13 minutes later, Addison Westbrook, off an assist from her sister — junior Kennedy Westbrook — buried a shot in the back of the net to extend the lead to 4-0.

About a minute later, Stillman, of an assist from Kennedy Westbrook, who had three assists in the game, scored to put the lead to 5-0.

Less than 60 seconds later, sophomore Paige Robinson, off Addison Westbrook’s second assist of the game, found the back of the net to give Waverly a 6-0 lead with 10 minutes left in the first half.

Kennedy Westbrook and VanAllen added goals in the second half to provide the final margin.

“Lea VanAllen set the tone fast and early,” said Hogan. “Kennedy and Lea were very unselfish and were constantly looking to play the forwards. They also worked very well under pressure and with great confidence.

“Paige Robinson was able to move up again this game and found the back of the net,” Hogan noted. “Kiley Stillman again worked well on the left side —  her positioning has gotten so much better.

“Brinn Cooney saw more time at half field today and did very well under pressure,” added Hogan. “And, Faith Blauvelt and Allison Campbell had a couple opportunities as well.”

The Lady Wolverines dominated play, outshooting SVEC, 23-0. They also had a 12-1 advantage in shots-on-goal.
Waverly, now 3-1, returns to action Friday at Newark Valley.