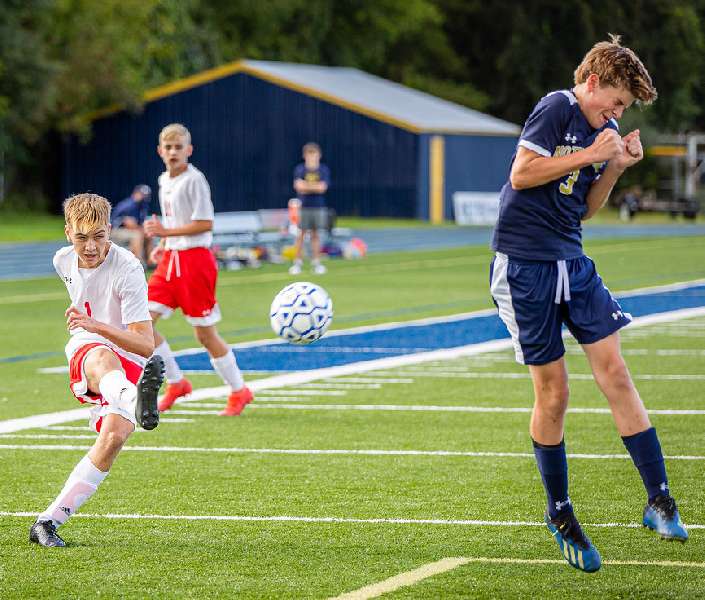 SOUTHPORT, N.Y. — Waverly controlled the ball, held Notre Dame without a shot-on-goal, and made the most of its shots in a 3-0 win here Thursday evening in IAC South Large School boys soccer action.

Senior Brennan Traub, who also had two assists, put Waverly on the board early in the game on a header off a “beautiful service” from sophomore Griff Schillmoeller.

Ryck said the Wolverines picked up their level of play after the intermission.

“We came out much better in the second half, upped the pressure and moved the ball much better, which created a lot of opportunities for us to score,” said Ryck.

Senior defender Declan Murphy was credited with a goal on a corner kick that gave the Wolverines a 2-0 lead. Sophomore Charlie Larrabee launched his corner kick into the goal mouth, where Traub headed it toward the goal line, where it caromed off Murphy’s shoulder and into the net.

Schillmoeller, off a feed from Traub, scored to provide the final margin.

“Everyone, top to bottom, gave us quality minutes tonight,” said Ryck. “Alex Emanuel has really stepped up this year and is playing well on the wing for us,

“Sheldon Huddleston always gets quality touches on the ball on the other wing, and coming off the bench Nehemiah Anthony, Ralph Johnson, and Jonathan Searles worked their butts off and give us good depth that we can count on in our roster,” added Ryck.

Waverly had a 6-0 advantage in shots-on-goal, and a 2-0 edge in corner kicks.

Jackson Potter had three saves in net for the Crusaders, while Waverly senior keeper Cameron McIsaac was untested.