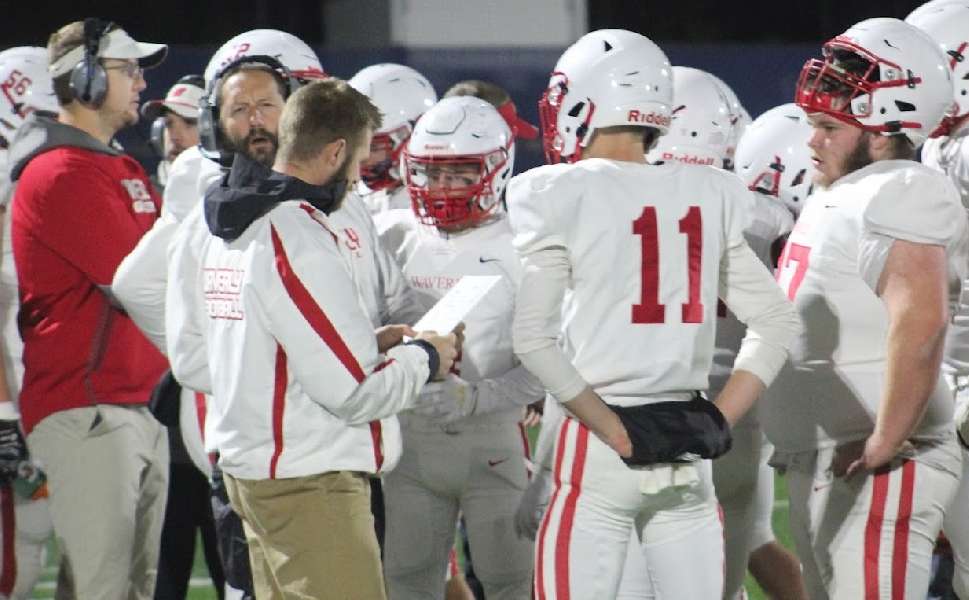 Sophomore Joey Tomasso ran for two scores and threw for another to lead Waverly to a 21-14 win over Susquehanna Valley here on a rainy Friday night, capping a 9-0 regular season — the second time in program history a Wolverine team has gone 9-0.

“To go 9-0 is a very special achievement,” said Waverly coach Jason Miller. “And, the way we did it tonight, makes it even more special.

“We had some guys step up tonight,” noted Miller. “We had DJ (Shaw) out and (Cayden) Turscik got hurt early on, so that hurt us at guard and linebacker, but we had some sophomores step up and make a big difference. They found a way to get their jobs done.”

Waverly’s defense started the game on the field, and quickly got the ball to the Wolverines offense, thanks in large part due to a QB sack by senior Cayden Turcsik. A short SV punt gave Waverly the ball at the Saber 42.

Junior tailback Gage Tedesco bulled his way for 8 yards on his first carry of the ball, but an incomplete pass, and a low shotgun snap on the soggy turf left Waverly facing 4th-and-9.

Another incomplete pass gave the Sabers the ball back at their 28. Thirteen plays later, Scott Howard capped a 5 1/2-minute drive with a 6-yard TD run. Ryan Rychlewski’s conversion run made it 8-0 with 1:32 remaining in the first quarter.

Connor Stotler mishandled the ensuing kickoff, but corralled the ball and returned it 38 yards to midfield. However, a flag for an illegal block brought the ball back to the Waverly 20.

Tomasso started off the possession with a 13-yard run, and sophomore Jay Pipher followed with a 12-yard run on a jet sweep, but a holding call brought the ball and put the Wolverines in a first-and-17 hole.

Six plays later, including a 12-yard run by Tedesco and a 12-yard completion from Tomasso to senior Brady Blauvelt, Tomasso scored on a 3-yard run with 9:38 remaining in the first half. Tedesco hauled in a Tomasso pass on the conversion to make it 8-8.

After returning the ensuing kickoff to its 46, the Sabers hit on a 19-yard pass to the Waverly 35, but turned the ball over on downs four plays later at the Wolverine 28.

Senior Thomas Hand started the possession with an 8-yard run on a jet sweep, and Tomasso added runs of 14 and 10 yards to move the ball to the SV 32.

After a 2-yard run by Tomasso, he completed back-to-back passes to junior Isaiah Bretz — each for 10 yards — to move the ball to the Saber 10.

On third-and-goal, Tomasso rifled a quick slant to Pipher for a 5-yard TD with 2:14 remaining in the first half. Junior Ryan Clark’s PAT kick made it 15-8.

The Sabers took over at their 31 following the ensuing kickoff, and put together a brilliant 12-play drive, capped by a 4-yard TD from Quintin Bowman to Rychlewski with 11 seconds remaining in the half to trim the Waverly lead to 15-14.

Several Waverly defenders stuffed the two-point conversion, and the Wolverines led 15-14 at the half.

Waverly’s first possession of the second half was a quick three-and-out. Tomasso’s 38-yard punt rolled dead at the SV 24.

The Sabers used eight running plays to rack up four first downs and move the ball to the Waverly 33.

On third-and-4 at the Waverly 27, a blitzing Conner Stotler dropped Rychlewski for a 3-yard loss.

On fourth-and-7, Bretz broke up a pass play on the home sidelines to force a turnover on downs.

The Waverly defense would only allow one first down the remainder of the game, while the Wolverine offense controlled the ball for more than 9 1/2 minutes in the fourth quarter.

After a trade of punts, Waverly took over at  its 44 with 11:53 remaining in the contest.

Senior Kaden Wheeler banged out a pair of runs for nine yards, and Tomasso converted the third-and-1 with a 5-yard run to the SV 42.

On the next play, Tomasso faked a handoff to Pipher on a jet sweep around right end, and took off to the left. He slipped on the wet turf with his first step, but regained his footing and raced untouched 42 yards for the TD with 10:14 remaining in the contest. The PAT kick was wide left and Wavily led 21-14.

Waverly forced a quick punt on SV's next possession, and the Wolverine offense took over at its 25 with 7:58 remaining.

After two runs by sophomore Braedon Hills netted 12 yards, and set Waverly up with a first down at the SV 19, Pipher gained eight yards on a jet sweep.

Facing third-and-2 at the SV 11, Tomasso drew the Saber defense offsides for a first down with 1:40 remaining.

The Wolverines took a knee twice in victory formation to run out the clock.

Waverly ran for 207 yards in the game, led by Tomasso, who gained 128 yards on 17 carries. Tedesco added 36 yards on seven carries, and Pipher chipped in with 31 yards on four carries.

Tomasso completed 9 of 19 passes for 51 yards and one TD. Blauvelt led Waverly with three receptions for 20 yards, while Bretz had two grabs for 20 yards, and Pipher had four catches for 11 yards.

Susquehanna Valley rushed for 227 yards on 48 carries. Rychlewski led the Sabers with 102 yards on 20 carries, and Howard added 65 yards on nine carries.

Bowman completed 3 of 6 passes for 28 yards.

Waverly will host Norwich next weekend in the semifinals of the Section IV, Class C playoffs.

“We’re going to enjoy this over the weekend, but we need to get healthy,” said Miller. “We’ll prepare the way we always do … it’s not any different than any other game.

“We have to go out and play hard, but the good news is we’re at home,” added Miller. “We’ll play with whoever we have, but we still have a lot of leadership on this team and that carried us (tonight) in the second half for sure.”