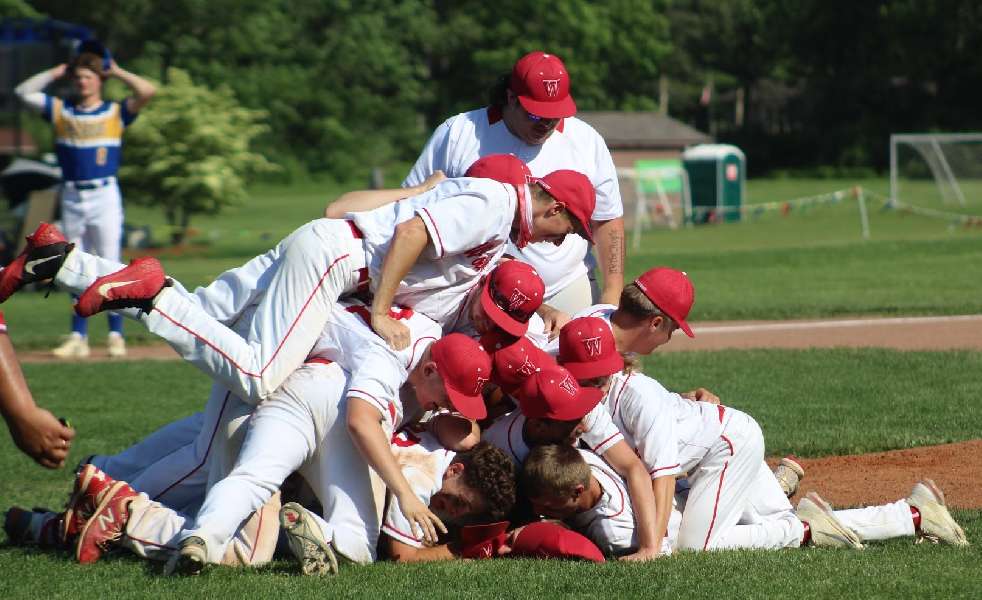 TRUMANSBURG — Freshman Jay Pipher pitched out of trouble early, and threw five innings of scoreless relief to help Waverly to a 4-2 win over Trumansburg here Saturday afternoon in the championships game of the IAC baseball tournament.

“This was a well played game by both sides,” said Waverly coach Kyle McDuffee. ”When you play against Coach Voorhees-coached team, you know you are in for an excellent game.”

With Dunn Field unavailable, the IAC North schools had home-field advantage in this year’s championship games.

“Winning an IAC championship game is hard to do on a neutral field,” said McDuffee. “Winning at T-Burg was even harder.

“My kids blocked that element out, and worked like a team to overcome home-field advantage,” added McDuffee.

Pipher entered the game in the third inning with Waverly trailing 2-1 and two runners on. He walked the first batter he faced to load the bases, then retired the next three batters he faced without allowing another run.

In his five innings of scoreless relief, Pipher allowed three hits, while striking out three and walking two to earn the win.

“Jay Pipher coming in in relief and getting out of a bases-loaded, no-outs jam in third inning with no runs was big, especially in a pressure situation as a freshman,” said McDuffee. “He pitched an excellent game.”

Junior Caden Hollywood and sophomore Ty Beeman stroked back-to-back singles to begin the top of the sixth inning. With two outs, junior Brady Blauvelt smacked a two-run double to left field to give the Wolverines a 3-2 lead.

In the seventh inning, Pipher ripped a one-out double to center field. Pipher advanced to third on a groundout off the bat of freshman Joey Tomasso, and scored on a wild pitch to make it 4-2.

“Brady Blauvelt was clutch with a two-out double to score two runs In the sixth inning that put us up by one,” said McDuffee.

“Brady has been playing real strong baseball, and at the right time,” added McDuffee.

Waverly took the lead in the top of the first inning, scoring a run with two outs. Tomasso was hit by a pitch, stole second and third base, then scored on an RBI single by junior Caden Hollywood.

Trumansburg’s first three batters in the bottom of the third inning reached to load the bases, then Tanner Potter stroked a two-run single to give Trumansburg a 2-1 lead, and knock Waverly starter Derek Seymour out of the game.

Juniors Thomas Hand and Brennan Traub each singled in the win, and Tomasso scored one run and stole two bases in the win.

Waverly, now 14-4, will likely return to action Tuesday with a home game in the Section IV, Class B playoffs.