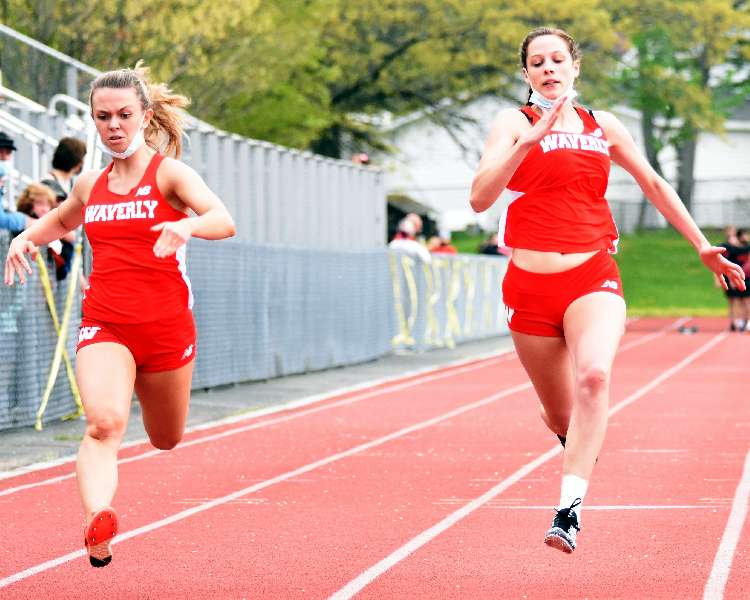 Kennedy Westbrook won the 100-meter dash in 13.4 seconds, while Abigail Knolles was second in 13.9, and Natalie Garrity was third at 14.1 seconds against S-VE. Westbrook and Knolles finished 1-2 against Edison.

Kennedy Westbrook won the 200-meter dash in 28.1 seconds, while Knolles was second in 29.4 seconds, and Paige Robinson was third in 31.8 seconds against S-VE. Westbrook and Knolles were 1-2 against Edison.

The foursome of Kennedy Westbrook, Knolles, Natalie Garrity, and Picco won the 400-meter relay in a time of 55.0 seconds in both meets.

Kennedy Westbrook teamed with Knolles, Addison Westbrook, and Picco to win the 1,600-meter relay in a time of 4:43.2 in both meets.

Picco won the high jump at 3-feet, 8-inches, and Addison Westbrook was second at 3-feet, 4-inches against both teams.

Olivia NIttinger won the pole vault in both meets at 6-feet, 6-inches.

Dengler and Gadow teamed with Nate Ryck and Sam VanDyke to win the 1,600-meter relay in both meets in a time of 3:54.9.

Gadow and Ryck teamed with Ryan Lambert and Treyton Moore won the 400-meter relay in both meets in a time of 47.7 seconds

Ryan Lambert and Micah Chandler tied for first in the 100-meter dash at 11.8 seconds against Edison, and finished tied for second against S-VE.

Chandler, a triple-winner against Edison, won the 200-meter dash in 24.3 seconds, and Nate Ryck was third in 24.9 seconds. The duo also finished 1-2 against S-VE, and Lambert was third in 25.1 seconds.

Clark won the discus against Edison with a toss of 79-feet, and Oscar Williams was second at 72-feet, 5-inches. The duo finished 2-3 against S-VE.

Clark finished second in the shot put against Edison with a heave of 30-feet, 9-inches, and Moore was third at 27-feet, 9 1/2-inches. Clark was third against S-VE.