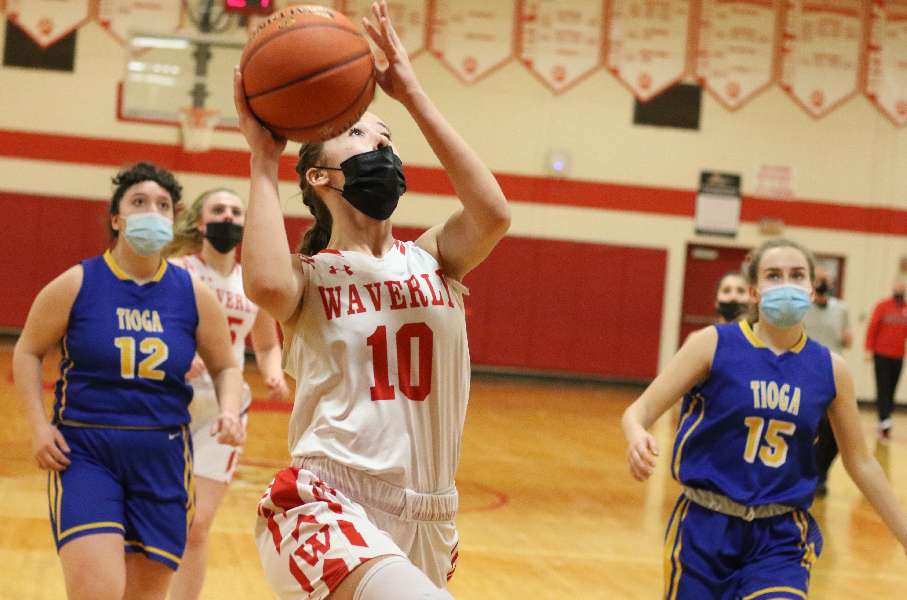 WAVERLY — Senior Gabby Picco connected on a pair of 3-pointers to start the second quarter, and Waverly kept knocking them down from behind the arc, pumping in a school-record 16 in an 84-31 win over Tioga here Tuesday night in IAC girls basketball action.

“They were going in, weren’t they?,” laughed Kelly. “Yeah, we shot it well. And, it’s good when it’s coming from a lot of places.”

Eighth-grader Addison Westbrook scored a career-high 23 points and led the Lady Wolverines with six 3-pointers, including four in the fourth quarter, while Picco finished the game with 17 points and five 3-pointers. Senior Sidney Tomasso scored 21 points, and had a trio of 3-pointers. Sophomore Kennedy Westbrook, who had 11 points, and freshman Peyton Shaw, who had five points, each had one 3-pointer.

“How many 3s did they have tonight?” said Tioga coach Joe Robinson. “They could not miss; that was something else.”

In a sign of things to come, Kennedy Westbrook drained a 3-pointer just 12 seconds into the game, then Tomasso and Westbrook scored lay-ups in transition to make it 7-0.

After a bucket by sophomore Reese Howey put the Lady Tigers on the board with 6:55 remaining in the first quarter, Tomasso scored on an offensive rebound, and Westbrook and Picco scored fast-break lay-ups to make it 13-2 just 2 1/2 minutes into the game — forcing Robinson to call his second time out of the game.

“We thought our pressure could cause them problems,” said Kelly. “Every game, we try to get off to a good start, and get some early momentum. I thought we did that tonight.”

After another bucket by Howey, Picco drained her first 3-pointer of the game to make it 16-4, but senior Eve Wood answered with a 3-pointer, and Howey and senior Olivia Ayres added buckets in a 7-0 spurt that trimmed the deficit to 16-11 with 3:52 remaining in the first quarter.

The scoring pace slowed for a few minutes, and senior Ari Manwaring’s putback on the offensive glass pulled Tioga within four points, at 17-13, with 58 seconds remaining in the opening stanza.

“We had a good stretch their at the end of the first quarter,” said Robinson. “Believe it or not, I think we played a little better than we did (Saturday), although it may not look it on the scoreboard. We took care of the ball a little better, and didn’t have as many turnovers.”

Tomasso scored in transition with 19 seconds left to give Waverly a 19-13 lead after the opening eight minutes.

Wood scored on a shot jumper to open the second-half scoring and trim the deficit to 38-22, but that was as close as Tioga would get.

After a pair of free throw by Shaw, Tomasso knocked down a 3-pointer and a baseline runner, before Picco’s trey capped the 10-0 spurt that pushed the lead to 48-22 with 5:05 left in the third quarter.

Addison Westbrook drained a 3-pointer with 42 seconds left in the third quarter to extend Waverly’s lead to 56-26 entering the final eight minutes. She added four more treys and scored 14 points in the fourth quarter to fuel Waverly’s 25-point outburst.

“It’s a good stretch ahead of us,” said Kelly. “I think the girls are focused, and ready. We’re just going to take it one game at a time, and embrace the situation.”