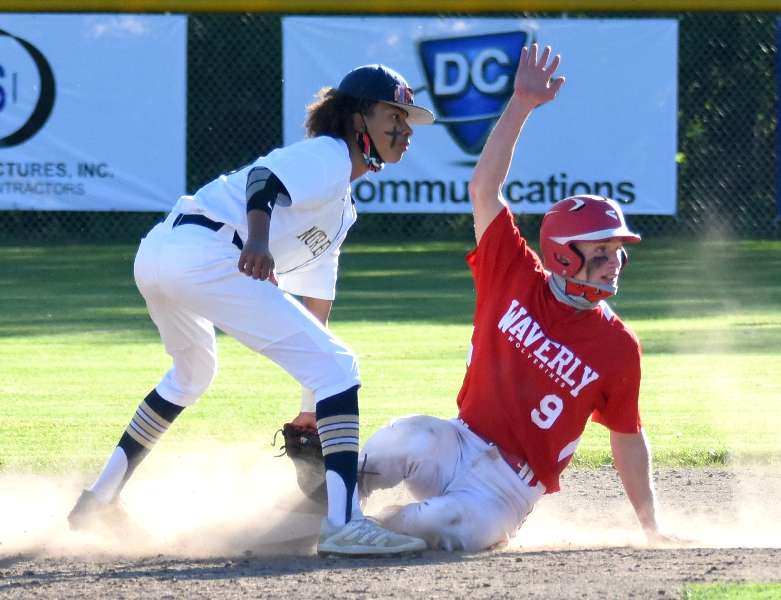 Hollywood allowed one run on five hits, while striking out six and walking two to earn the win. Beeman struck out two in a perfect inning of relief to earn the save.

Junior Thomas Hand and freshman Jay Pipher led off the game with back-to-back singles, but Notre Dame starter Owen Stewart settled down and retired the next three batters.

Stewart fanned the first three Waverly batters he faced in the second inning, but junior Kaden Wheeler was able to reach on a dropped third strike. Jack Barrett was hit by a pitch, Hand walked to load the bases.

Pipher stroked a hard RBI groundball single through the hole at shortstop to give the Wolverines a 1-0 lead. Moments later, Barrett scooted home on a passed ball to make it 2-0.

Beeman and Hollywood led off the third inning with back-to-back singles, but Stewart struck out the next three hitters to escape the jam unscathed.

Stewart helped his own cause with an RBI in the bottom of the third inning, but Hollywood pitched out of a bases-loaded jam to preserve the 2-1 lead.

Hollywood retired the next nine batters he faced, thanks to a 1-6-3 double-play in the sixth inning, and Waverly maintained a 2-1 lead after six innings.

Pipher took a four-pitch walk to lead off the seventh, and freshman Joey Tomasso followed with a double to put runners on second and third. Beeman delivered a sacrifice fly to make it 3-1.

After a walk to Hollywood, and a single by junior Brennan Traub loaded the bases, Wheeler drove in a run with a sacrifice fly to make it 4-1.

With Hollywood at the pitch-count limit, Beeman entered the game in the seventh, and needed just 12 pitches to end the game.

Hand, Hollywood, and Traub added singles in the win, while Wheeler scored one run and drove in one run, and Barrett scored one run.

Stewart was tagged with the hard-luck loss for the Crusaders. He allowed two runs — one earned — on five hits, while striking out 15 and walking two in 5 2/3 innings of work.