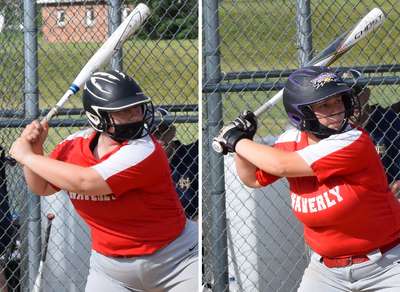 FIRST TEAM
Aubrey Ennis, junior, catcher, Waverly: A powerhouse at the plate, Ennis led the Wolverines in nearly every category at the plate. She hit a team-leading .475, and led the team with 29 hits (61 at-bats), seven doubles, five home runs, 24 RBI, an .836 on-base percentage, and a 1.385 OPS. She also scored 18 runs and stole two bases.

Olivia Robinson, freshman, outfield, Waverly: Fast hands and a quick bat, Robinson hit line drives for the Lady Wolverines from Day 1 of her varsity season. She was second on the with a .379 average (22 hits in 58 ABs), with three doubles, one triple, eight RBI, two stolen bases, and 19 runs scored. She also walked seven times, was hit by pitches six times, and had a .493 on-base percentage.

HONORABLE MENTION
Alyssa Sindoni, senior, second base, Waverly: A good glove at second base, Sindoni hit .283 (16 hits in 56 ABs) with three doubles, 14 runs scored, and three stolen bases. She was second on the team with 17 RBI. She drew 12 walks, and had an on-base percentage of .412.

Sidney Tomasso, senior, shortstop, Waverly: In her only season of varsity softball, Tomasso enjoyed a good all-around season. She hit .338 (24 hits in 71 ABs) with three doubles, and eight RBI. She led the team with three triples, 24 runs scored, and six stolen bases.