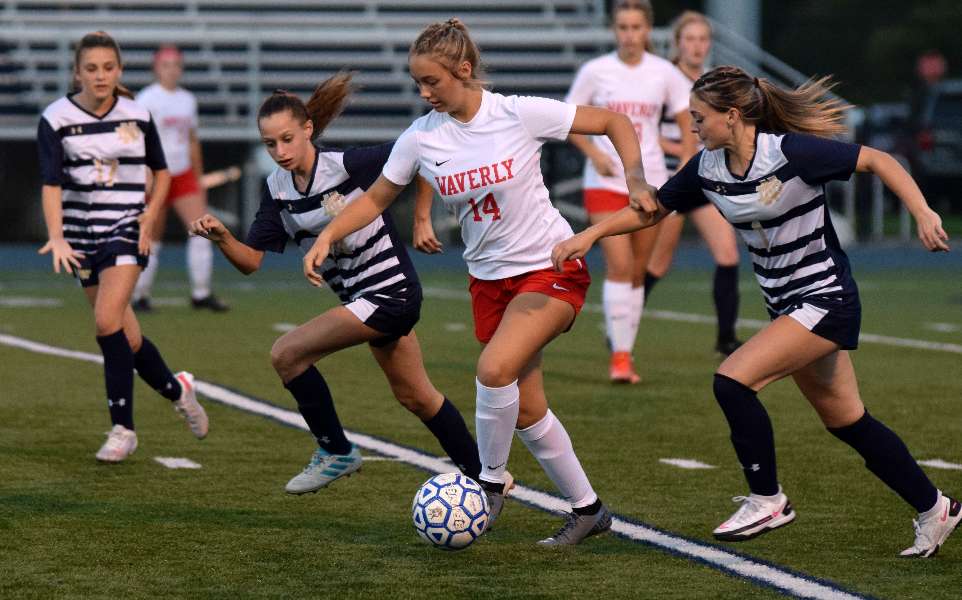 SOUTHPORT — Waverly and Notre Dame battled for 100 minutes, and neither was able to dent the other’s defenses in a scoreless draw here Friday night at Brewer Stadium in IAC girls soccer action.

“We were slow and quiet to start. It took a long time for us to get our bearings and settle down,” said Waverly coach Tara Hogan. “A lot of the time we didn't realize that we had more time and space than we thought.

“We found ourselves rushing the passes and not taking the time to make smart passes,” added Hogan. “It resulted in a lot of extra work for us.”

“I thought we played well in moments. We seemed to be in their end the majority of the game,” he said. “I have to do a better job in helping them tactically, how to break those last lines of defenders.”

Notre Dame had a 7-5 advantage in shots-on-goal, and a 2-1 edge in corner kicks.

Freshman Lea Cole had seven goals in net for Waverly.

“Lea Cole had the best game of our season so far,” said Hogan. “She was so confident and made some very impressive saves.

“I’m really proud of how she stepped up tonight,” she added.

Hogan also tipped her cap to her defense.

“As always, I need to credit our phenomenal defense,” she said. “Paige Robinson, Bella Romano, and Olivia Robinson did another amazing job tonight in holding down the line.”

“Kennedy Westbrook helped literally every one of our lines in our formation,” noted Hogan. “She runs our field and is vital to all offensive and defensive movements.

“Lea VanAllen had some good opportunities tonight and was able to move up top for a short time,” said Hogan. “Lea has a great talent for seeing those open passing lanes to our forwards.

“I am dying to get Kennedy and Lea more time up top,” added Hogan.

She also had positive words on one of her newcomers.

“Overall, I am happy with the outcome and already look forward to seeing ND again,” said Hogan.

The Lady Wolverines return to action Monday at Tioga.