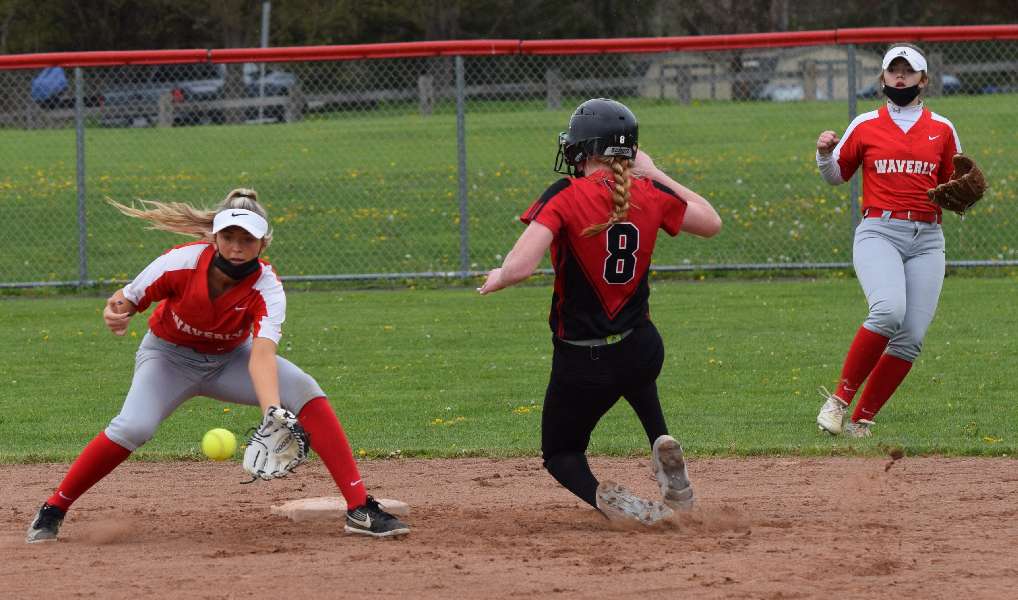 NEWARK VALLEY — Waverly built a 10-0 lead, powered by home runs from junior Aubrey Ennis and sophomore Michaela Lauper, on its way to a 15-6 win over Newark Valley in IAC softball action here on a rainy Friday afternoon.

The Lady Wolverines took a quick 3-0 lead in the top of the first inning. Freshman Olivia Robinson sparked the rally with a one-out single, took third on a double by Ennis, and scored on an RBI single by Bella Romano.

After Ennis scored on a passed ball to make it 2-0, senior Alyssa Sindoni drove home Romano with an RBI groundout to cap the rally.

Ennis made it 4-0 with a long home run over the left field fence with one out in the fourth inning. With two outs, Sindoni walked, and senior Hali Jenner singled. After the runners moved up on a passed ball, Lauper stroked a two-run single into center field to extend the lead to 6-0.

The Lady Wolverines tacked on three more runs in the top of the fourth inning. Senior Sidney Tomasso led off the frame with a double, and Robinson followed with a line-drive single to left field. After consecutive base on balls to Ennis and Romano forced home a run, Sindoni and Jenner hit back-to-back RBI singles to make it 9-0.

Robinson’s two-out RBI double in the top of the fifth inning pushed the Waverly advantage to 10-0.

Newark Valley plated an unearned run in the home half of the fifth, but Lauper got the run back with a home run over the center field fence to make it 11-1.

Newark Valley scored another run in the bottom of the sixth, but Waverly answered with four runs to take a 16-2 lead after 6 1/2 innings. The rally was highlighted by an RBI double off the bat of Romano.

The Lady Cardinals provided the final margin with four runs in the bottom of the seventh.

Tomasso doubled and singled, and scored three runs for the Lady Wolverines, while Sindoni singled, scored two runs, and drove in two runs, and junior Jadyn Babcock added a single.

Jenner earned the win with a complete-game performance. She allowed six runs — three earned — on eight hits, while striking out six and walking three in seven innings of work.