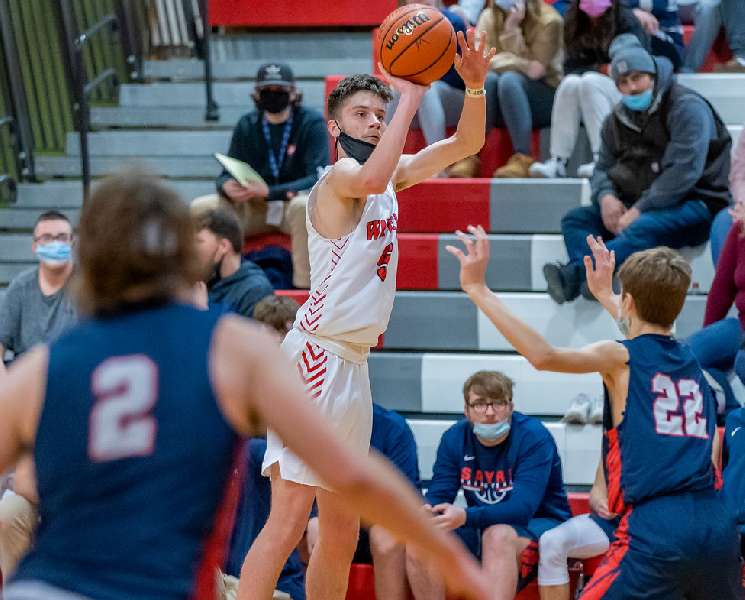 WAVERLY — Waverly shook off a slow start, and used pressure defense and balanced scoring in an 81-46 win over Sayre here Wednesday night in the consolation game of the boys Valley Christmas Basketball Tournament.

"I thought we might come out a little flat coming off that emotion game (Tuesday) night with Athens, and we did," said Waverly coach Lou Judson. "We were a step slow and lethargic in our defensive rotations early on and (Sayre) hit some 3s in the first half.

"We played pretty well in the second quarter, and took an 8-point lead at the half.

"Then, we switched up some defenses, and went to some full-court traps and made it more of an up-and-down paced game, and really got some points in transition off our defense," noted Judson.

"We probably played the best second half we've played this year," he added.

Judson said it wasn't all about the defensive adjustments.

"I think the guys just woke up," he said. "We may have taken our opponent a little bit lightly, but the guys realized Sayre came to play tonight and we need to get going.

"We had a nice discussion at half about what we needed to do," added Judson. "We made the adjustments, and the kids played a great second half."

Junior Jackson Hubbard scored nine points, including a 3-pointer, in the first quarter, while senior Dom Fabbri knocked down a pair of treys, and freshman Nick Pellicano added a 3-pointer to help the Redskins to a 20-18 lead after the first eight minutes.

Sophomore Joey Tomasso scored seven points, including a 3-pointer, while senior Brady Blauvelt added six points, and senior Liam Traub canned a 3-pointer and scored five points to keep the Wolverines within two points at the end of the opening stanza.

Senior Brennan Traub scored six points, and junior Isaiah Bretz and Tomasso each scored four as the Wolverines closed the half with a 10-2 run to take a 39-31 lead at the halftime intermission.

Brennan Traub and Blauvelt combined for 14 points in the third quarter, and junior Nate DeLill knocked down a 3-pointer in a 23-7 blitz that extended the Waverly advantage to 62-38 entering the final eight minutes.

Waverly kept it rolling in the fourth quarter as six different players fund the scoring column in a game-closing 19-8 run.