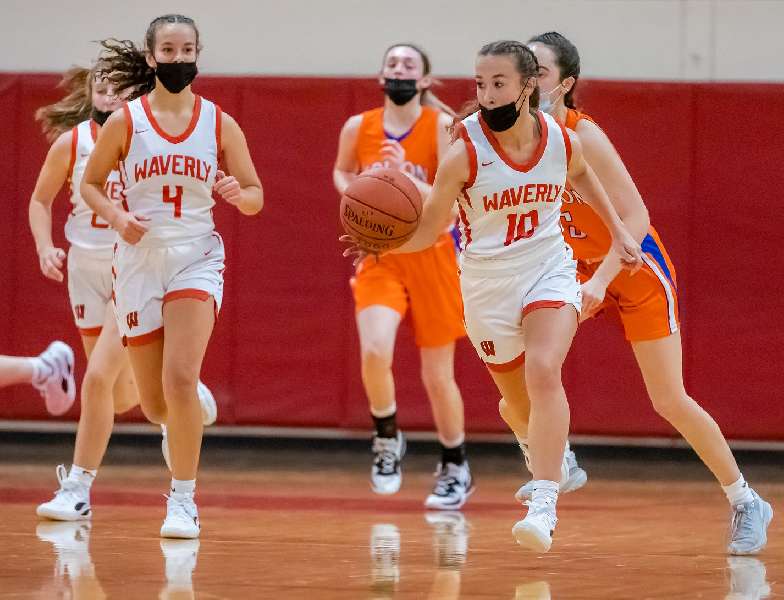 WAVERLY ROLLS TO 68-32 WIN OVER EDISON

WAVERLY — Edison kept it close for the first eight minutes, but Waverly opened up its lead in the second quarter, and pulled away in the second half on its way to a 68-32 win over Thomas A. Edison here Thursday night in IAC South Large School girls basketball action.

Waverly junior Kennedy Westbrook knocked down a trio of 3-pointers, and scored 14 points in the first quarter, but Edison's Peyton Littlefield answered with eight points, including a pair of 3-pointers, to keep it close. Waverly led 17-12 after the first eight minutes.

Kennedy Westbrook and her younger sister, freshman Addison Westbrook, scored four points apiece, and sophomore Peyton Shaw knocked down a 3-pointer in a 13-5 spurt that pushed the Lady Wolverines' lead to 30-17 at the half.

In the third quarter, Waverly limited Edison to just five points, while three different players — Addison Westbrook, senior Olivia Nittinger, and sophomore Paige Robinson — found the range from behind the three-point arc in a 17-5 blitz that pushed the lead to 47-22 entering the final eight minutes.

The Lady Wolverines didn't slow down in the fourth quarter as Nittinger scored seven points, including a 3-pointer, and Robinson, senior Lourden Benjamin each canned 3-pointers in a 21-10 game-closing run.